Colossus and Moon Knight, two characters exclusive to the PlayStation 3, Xbox 360, and Wii versions, are present in the PlayStation 2, PSP, and Xbox versions. They can be played through this glitch:

The PS2 version also appears to contain data of the 4 PSP-exclusive characters, Hawkeye, Ronin, Captain Marvel, and Black Widow. It is unknown if they are functional in-game.

An unfinished version of Wolverine's Ultimate skin is included in the files as 0305. 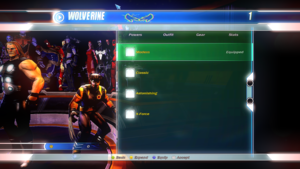 In the files is an actors file for Spider-Man villain Hobgoblin, who does not appear in the game. Hobgoblin would appear in the Vicarious Visions version of the sequel as Green Goblin's alternate costume. In addition, fellow Spider-Man villain Electro appears in concept art, but is similarly absent from the game, though it is unknown if any files for him still exist. He too would appear in the sequel, as the first supervillain fought. Electro would also be fought in the third game alongside Venom. 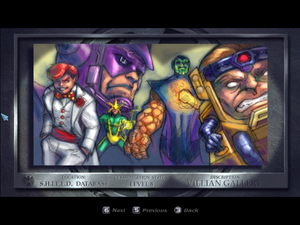