The trial version of Touhou Gensoukyou: Lotus Land Story has three stages which are no different than they are in the final, but some graphics and music are different.

The configuration file for the game can be edited freely (the final checks for edits), revealing some text in the options you can't normally see.

The backgrounds used in both Reimu's and Marisa's bombs are completely different.

Orange (the boss of the first stage) got a different background in the final. Both change colors throughout the battle in the exact same way.

Bad Apple, the song used in the third stage, has a slightly lower pitch in the trial version.

The Music Room underwent a few changes, and the trial even lists some of the music that went unused.

The unused songs Dreamy Pilot, Border Land, and Crescent Dream are listed in the trial but not playable. The three unused tracks that are missing from the list are Lotus Road, Incomplete Plot, and Magic Shop of Raspberry.

The 22nd song, 幻想の住人 (Those Who Live in Illusions), was added for the Name Registration menu in the final. The trial version does not use any music there.

All commentary can be found in the file "_MUSIC.TXT", which is contained in the archive file "東方幻想.郷".

By modifying miko.cfg within the game's files using a hex editor, you can reveal some options that you can't normally access. 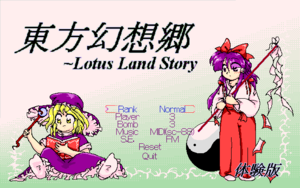 Setting the value of the Music option to 03, which is the fourth value in miko.cfg, will reveal the "MIDI" option. Nothing special actually happens besides the option appearing, though, as it still plays the regular FM86 music. This could mean that Lotus Land Story was going to have MIDI music at some point, but the only PC-98 Touhou game that had MIDI music as an option was The Story of Eastern Wonderland.

Changing the music value to 03 in the final version of the game simply disables the music.

The Extra difficulty, despite missing the stage, is "available" by modifying the first value in Miko.cfg to 04. It has its specific color palette for the loading screen that's in the final, but the difficulty is no different from Normal, and it's listed as FM(26) in the Options menu.