Legacy of Lunatic Kingdom is the 15th game in the Touhou Project series. The Lunarians are trying to purify (read: kill everything in) Gensokyo, and it's up to one of the four protagonists to get to the bottom of it. Features the new Pointdevice Mode, which was inspired by I Wanna Be The Guy. Make of that what you will.

On the records screen, highlight the Extra Stage records for Marisa L and type heartland. If done correctly, you'll hear the 1up sound, and the Extra Stage and all practice stages will be unlocked for all characters and difficulty levels.

The code, which also appears in Impossible Spell Card, is most likely a reference to Kirin Heartland beer. 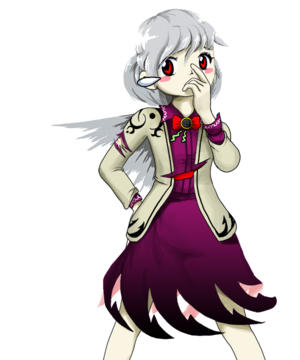 The Stage 4 boss, Sagume Kishin, has an unused "defeated" artwork. Notably, it reveals a red undershirt not seen anywhere else in-game.

In the official Touhou magazine, Strange Creators of Outer World, ZUN explained that he created the portrait as part of his workflow, but it became unused as the dialogue before the boss fight is rather short, and the dialogue after is rather long, so the player would not see much of her normal portraits.

The graphic for Overdrive difficulty from Ten Desires remains in the game. It can be seen by setting the difficulty value at address 004E7410 to 5. Several of the spells from Overdrive are also in there, albeit in a somewhat erratically-working form.