From The Cutting Room Floor
Jump to navigation Jump to search
This page contains changes which are not marked for translation.
Other languages:
English • ‎中文（中国大陆）‎ • ‎한국어

Touhou Gensoukyou ~ Lotus Land Story is the fourth game in the Touhou series. Multiple things were introduced in this game that became staples for the rest of the series, such as playing through six stages, slowing your movement speed, and grazing bullets. 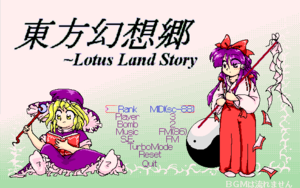 MIDI option as the difficulty.

The MIDI option, which was an unused music option in the trial version, still has its text present. This time, however, the text is not listed in the music options at all.

Using a hex editor, modify the first value in miko.cfg to 06 and the last value to 0F (the last value should only be changed to 0F if miko.cfg has the default settings) to change the difficulty to MIDI(sc-88) in the options menu.

Be sure to backup your save file (gensou.scr) if you try this, as there is a chance that it will get corrupted if you go into high score menu or start the game with this option.