Touhou Reiiden: The Highly Responsive to Prayers is the first game in the long-running Touhou series. Being a PC-98 game, it never gained much recognition outside of Japan, and is now mainly notable for being the only game in the mainline Touhou series that isn't a vertical shooter.

Fortunately, ZUN found a better formula shortly afterward with Story of Eastern Wonderland, and the rest was history.

ZIPANGU.MDT is an unused music track, titled "Shrine of the Wind" in the game's music test. It is also the only track from the PC-98 Touhou games not to be remixed for Mystic Square, and does not appear on any of the official soundtrack albums. Strangely, this track will play if an invalid stage is entered in the stage selection screen. It could be a fallback for when there is no music associated with a stage.

Unlike several later games in the series, The Highly Responsive to Prayers lacks an option to select how many bombs you start with. However, the setting still exists in the (non-human-readable) configuration file, suggesting it once was or was planned to be an option at some point.

Open REIIDEN.CFG in a hex editor and change the ninth byte to between 0 and 5 to change the initial number of bombs.

Stage selection prompt, shown upon starting a new game under any debug setting. This will start the game on Stage 20 of the 地獄/Jigoku/Hell route.

The game has some leftover code used for debugging, consisting of an in-game display and a memory info screen. These can be activated by starting the game with an additional command-line parameter from the DOS prompt:

Note that quitting a game in progress will cause all of these to be disabled. 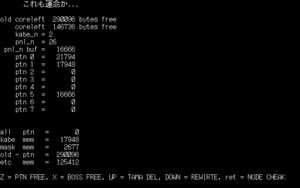 Also, pressing Roll Up (PgUp) during gameplay displays a screen with information about currently allocated memory. The available actions here: 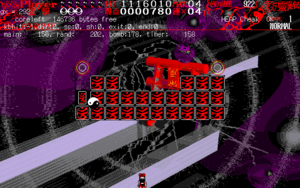 In debug mode, some game state information is displayed under the status bar:

When using the stage selection mode, if the player inputs an value higher than 19, the game shows an hidden stage with the red colors swapped to green. After passing this stage, the game crashes, showing the cards of the next stage flipping.