100th Black Market is the "18.5th" game in the Touhou series and the 3rd game in the series that omits Touhou in its title. After the ending of Unconnected Marketeers, ability cards are spread around Gensokyo, and black markets crop up rapidly, proliferating an unofficial currency and disrupting the ability card market. Marisa Kirisame, the protagonist, embarks on an investigation into this economic disruption and collects shiny, new ability cards along the way. This game is a follow-up to Unconnected Marketeers created to celebrate the 100th Comic Market.

Like in Unconnected Marketeers, there is a beer-themed unlock cheat in this game: on the trophies and achievements screen, highlight the last achievement and type asahimaruefu. It's a reference to Asahi's "Maru F" beer.

If successful, one will hear the one-up sound. Unfortunately, the game does not appear to do anything else: all stages, ability cards, etc., remain locked. 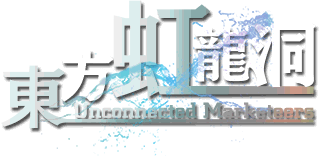 For some reason, the "Select New Ability Card" text sprite in ability/abilitymenu.png has two copies of the Japanese text, overlapping each other.

The game has no replay system as of August 15, 2022, but there are traces of the system in the game's assets. This suggests that ZUN may have planned (or is planning) to have the feature in the game. It is also possible that these mentions are simply leftovers of Unconnected Marketeers, as this game reuses its assets.

This is a C-style format string in the game's binary at address 0x4B992C, ostensibly for replay filenames, where %.2d is substituted with the replay number.

There are also several mentions of the replay system's functionality in graphics related to the pause screen.