When the Infogrames logo appears, press and hold the following buttons on Controller 1, one by one, in this exact order: L, R, Left, A, Select. If done correctly, you'll hear some music play. 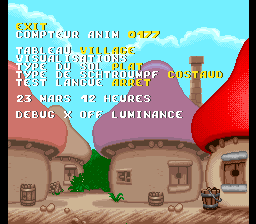 Press L + R + Select while in a stage to open a Debug Mode screen, which will be in French regardless of what language you chose at the start of the game. The menu itself works fine, but sometimes the game will not redraw the stage properly after exiting it, leaving a sort of burnt-in shadow of the menu which shows up at various points in the stage. The available options are:

Seems to be a counter of some sort. Its value always increases regardless of what you do.

Displays the name of the stage you're in. You can warp to any other stage by selecting the option, changing the stage name with the D-Pad, and pressing B. Note that you cannot warp to either of the two bonus stages, even though their names (Cicogne [Stork] and Riviere [River]) can be found in the ROM with the rest of the level names.

Opens a submenu with an option that lets you see the sprites loaded to VRAM with an incorrect palette.

Shows the name of the Smurf you're playing as. In the "Luge" stage, the Smurf is called "Luge", and strangely, no name is displayed if you're in a bonus stage.

Turned off (ARRET) by default. Set this to "on" (MARCHE), then load a new level. This will finish the level you just loaded, and play the between-level scene transitions and cutscenes. This will make the first two bosses die upon encountering them, while the Snake and Gargamel bosses will only take one hit to be defeated. They can also still hurt you if you're not careful! Finally, this code won't let you bypass the "Escalier" (stairs) stage, so you have to finish it normally.

A build date and time (Noon, March 23) is also shown on this screen.

Due to the way the camera pans around the world map, the full map is never seen. Even removing the cloud layer still cuts off a small section towards the south east. Using a memory editor, it is possible to view the map in its entirety. 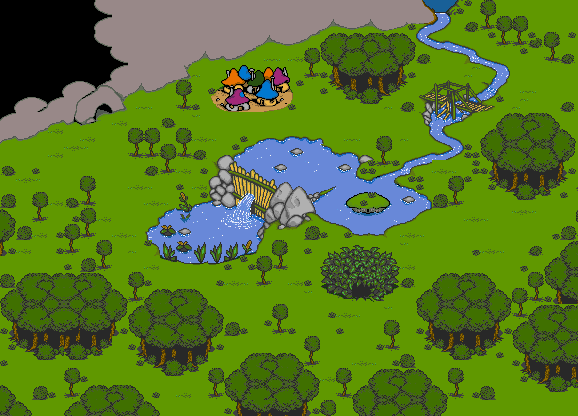