A more colorful Smurf of the Game Boy version. 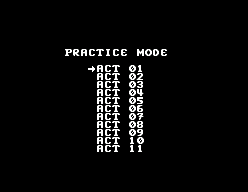 There is a level select that can be accessed after the intro with Action Replay code 00D89A01. Note that Act 12 is not selectable.

It seems as though you cannot access this screen outside of cheating, unlike in the Game Boy version where you can access it by beating the game.

As in the the Game Boy version, the music for Act 9, Inside the Volcano, lasts around 1 minute and 33 seconds before looping. However, the player can never hear the full song due to a rising plane of instant-death lava that forces a hard time limit of roughly 40 seconds.