The Smurfs is a Game Boy game based on The Smurfs (what else?).

By beating the game and pressing Start after the staff roll, you can access a level selection screen. Note that this level select uses Hard difficulty and that the twelfth level is missing. The Game Genie code 311-C3F-2A2 will enable the level select on all versions of the game.

The music for Act 9 (Inside the Volcano) lasts for approximately 1 minute and 35 seconds before looping, yet the actual level lasts for around 40 seconds. Additionally, the level's main gimmick involves lava that starts rising a few seconds after starting the level, so it isn't possible to prolong the level long enough to hear the full song.

Version 1.0 – which was released only in Europe – supports four different languages: English, German, French and Spanish.

Version 1.1 – released in Europe and the US - removed the Spanish language, perhaps to make space for the Super Game Boy support. 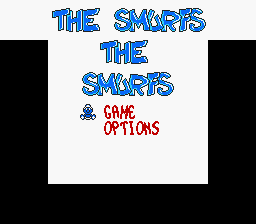 The Dragon's head is despawned.

On version 1.0, if you pull out many present boxes at once during the Dragon fight, the object/enemy slots would be filled up for the rest of the battle due to a glitch. The Dragon's head doesn't load anymore and the present box is rendered unusable. This was fixed in version 1.1.