A rare port of the Genesis game, now with extra videos! Some of the cinematics shown would later be reused in The Teletransport Smurf. 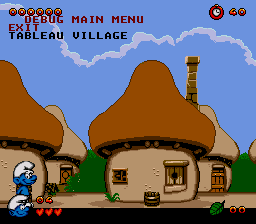 At the Infogrames logo, press and hold C, then B, then A. While still holding all these buttons, press Start to make some music play and confirm the code.

To access the menu, hold down the "run" button (whichever one is assigned), then press Start while in a level.

For some reason, the regular debug menu has been simplified even further compared to its cartridge version counterpart, despite being unlocked exactly the same way. 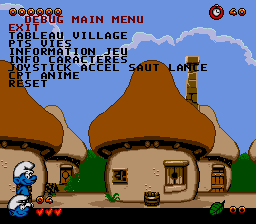 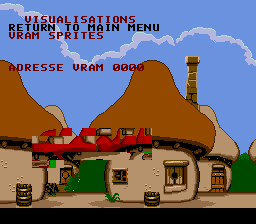 Enable Game Genie code BBJT-CACL, then enter the above code to add six more options to the debug menu, including those which were regularly displayed in the cartridge version.