A collection of nine mostly mediocre minigames, that nonetheless managed to sell incredibly well due to coming with a Wii remote.

Don't let anyone talk smack about the Tank minigame, though.

Found within Common/RPCommonParty/common.carc, there are a few unused graphics leftover from earlier in development.

A rather creepy placeholder for the Mii face in the billiards game. ball_face1 seems to be a much lower-resolution version of ball_face.

A leftover logo from Wii Sports. 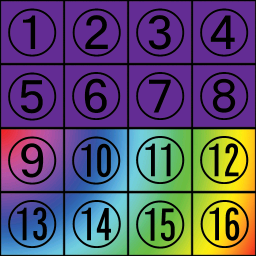 A dummy texture in billiards

A dummy Mii picture for the targets.

A test texture for blocks in tanks Block_other_b_test 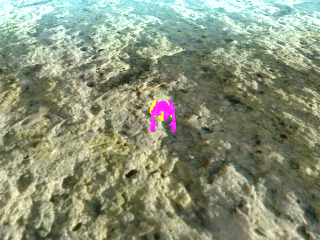 An odd picture of a pink and yellow... thing swimming. Probably an untextured Mii, judging by the hands.

A little emblem with Japanese text (はじめての meaning "first time", commonly, but not exclusively, used in place of "new game") and "Wii, Your First Step to Wii". 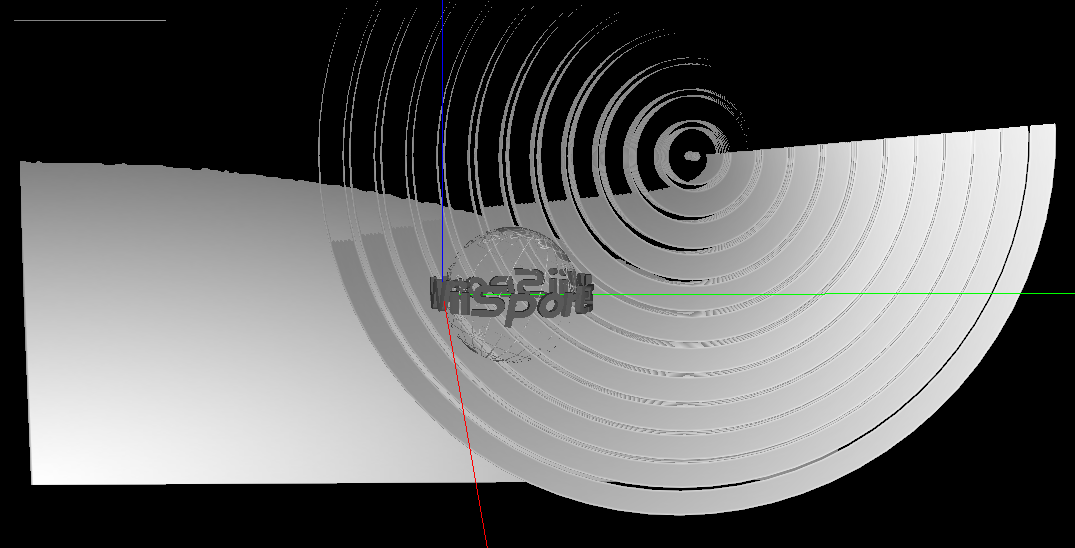 This appears to be a leftover model from Wii Sports. 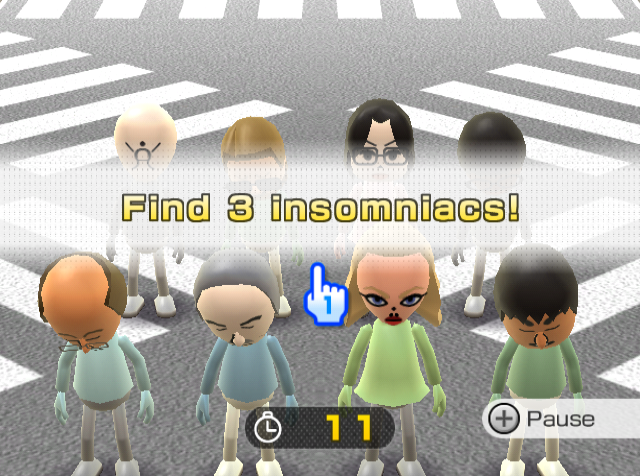 Find Mii has three unused objectives: "Find the insomniac!", "Find 2 insomniacs!" and "Find 3 insomniacs!". In these objectives, one to three Miis are awake, while all the other Miis are asleep. The goal is to find all of the Miis who are awake.

The /US/Message/message.carc directory of the NTSC-U version of Wii Play houses a file called party_message.bmg that stores the game's text strings. Throughout the BMG file, there are several groups of strings containing information about each of the game's nine minigames in sequential order. In these groups, however, there are always empty spaces between text for Billiards and Fishing. This empty space in this specific spot is repeated over and over again throughout the BMG.

The most likely explanation for this phenomenon is that this space is left over from the conductor minigame that was planned for Wii Play, but later scrapped and reworked into a full game, Wii Music. This matter is discussed in this Iwata Asks interview. If this is indeed the reason for the empty space, it would also imply that the minigame, now included in Wii Music as "Mii Maestro", would have been placed in between the Billiards and Fishing games.

The code of the game references some paths for files and folders that no longer exist within the filesystem (or have been moved).

The internal name of the game is "PARTY PACK for REVOLUTION". Revolution was the Wii's codename, meaning that it would have been in development before the console's name was finalized.

Present in the root directory file timestamp.txt, with the date in the "YYYY/MM/DD" format and the time below.

The function at the virtual address 0x801865d0 reads timeStamp.txt and prints it to the title screen. 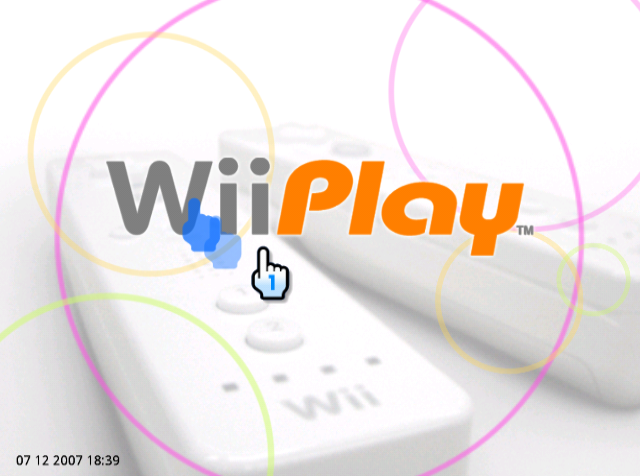 The player objects (both human and CPU) in Table Tennis have a 16-bit long field at offset 0x82 which stores flags in a bit-field. The function at the virtual address 0x802274c0 in the executable of the NTSC-U 1.01 version of the game handles some of the players' flags, including three debugging flags. 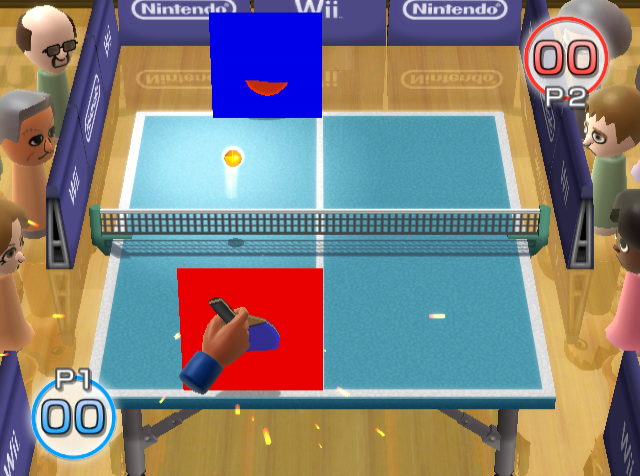 The display collision flag's mask is 0x0001. When the flag is set, the player's active collision box will be rendered (red for P1, blue for P2).

To permanently activate the display collision flag for both of the players, replace the instruction at offset 0x2222d8 of the US v1.01 main.dol file with 0x60000000. 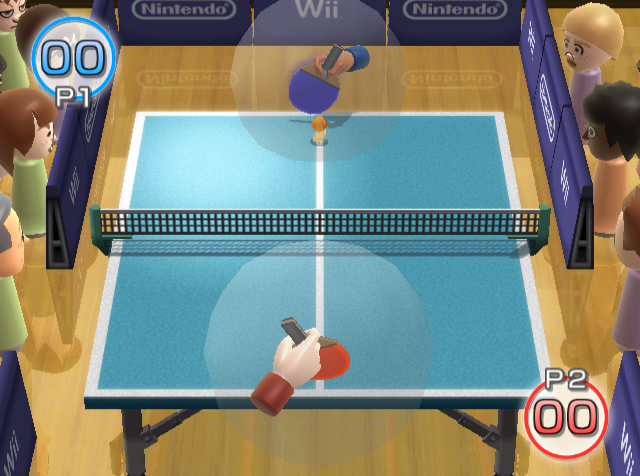 The display trigger flag's mask is 0x0002. When the flag is set, the player's trigger sphere will be rendered. The trigger sphere is a sphere where if the ball is found inside it, the player will play the hitting attempt animation.

To permanently activate the display collision flag for both of the players, replace the instruction at offset 0x222444 of the US v1.01 main.dol file with 0x60000000. 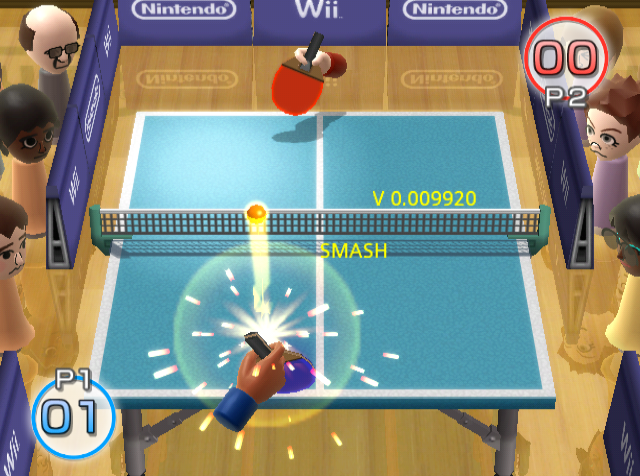 To permanently activate the display text flag for both of the players, replace the instruction at offset 0x2224f0 of the US v1.01 main.dol file with 0x60000000. 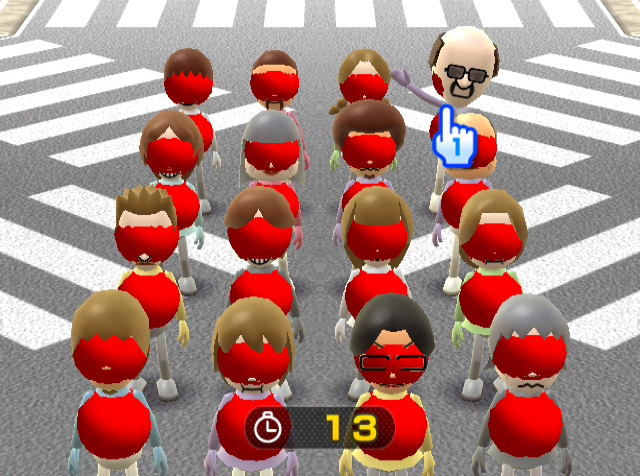 The following Gecko code renders the spheres for all of the Miis: