Xenogears is a well-known sci-fi RPG for PlayStation, which borrows heavily from various "giant robot" anime series, and was surrounded by a lot of controversy about its religious content back in the day. It also has a really, really weird storyline. And it's also very, very, very unfinished. Probably more so than SaGa Frontier, which speaks volumes.

Enter the following Action Replay code based on your version:

Now turn on your cheat device and start a new game, then turn it off. 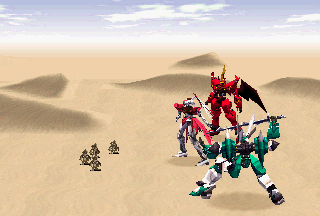 Elly's Omnigear, El-Regurus (or "El-Regrs", as it's called in the arena) is normally only seen in cutscenes, since Elly leaves the team permanently literally right before you'd get a chance to actually use it. Nevertheless, it still exists in the game in a fashion, and by using the GameShark code 8006D940 000A, you can replace Fei's Gear with it. Unfortunately, the in-battle model and idle animation appears to be all that exists, as the game locks up immediately upon entering battle, and it has no out-battle model, causing the game to lock up if it's attempted to be displayed there, as well.

These Gears are not unused, but some text associated with them is. 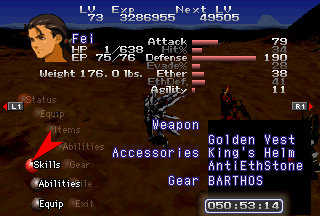 The Deurmods used by Bart's generic soldiers have the internal name "BARTHOS". You can use the GameShark code 8006D940 0011 to replace Fei's Gear with one, but be aware that it has no out of battle model, and the game will crash in any situation in which it should be displayed, such as exiting battle. 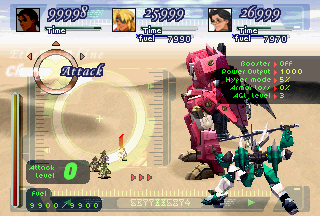 The Yggdrasil-IV is used, alone, in a single battle early in disc 2, and never again. Its internal name is "YGGDRA", and can be given to Fei via the GameShark code 8006D940 0012. Interestingly, it still towers over normal Gears, so it isn't merely a matter of "scale" in its fight against Ft. Hurricane. As with the Deurmods, the Yggdrasil-IV has no out of battle model, and will thus crash the game. 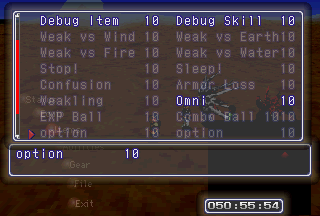 Enter in the Action Replay code 3006F672 0021 to add an item called Debug Item to your inventory.

There's a lot of unused equipment in the game, but the better majority of it does nothing, giving no stat boosts and having a sell price of 0G. There's also a glitch, in which if an item's name is thirteen characters long (including spaces), the last letter frequently gets overwritten by another random letter. 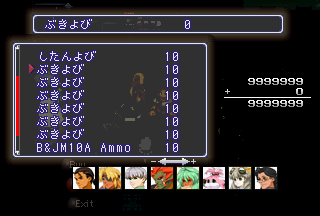 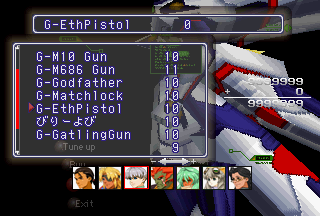 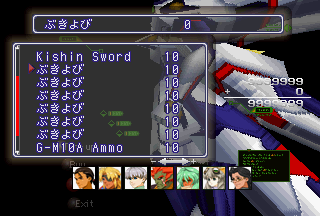 Famously, the OST features a beautiful lyrical rendition of the overworld theme called "Stars of Tears", which strangely, does not appear in the game anywhere. While it may have just been intended as a "bonus track", which is not uncommon on soundtracks, it is on the game disc(s), and can be heard in the debug room, where it accompanies a montage of the game's FMVs. It's unknown if or where it would have been used in the game proper, however.

A strange question mark graphic found with the face portraits. In all likelihood, this was intended to be used when an offscreen character spoke, but in the end, no graphic at all was used in these situations.

Similarly to Chrono Trigger, the game displays a chapter title on each save file in the save menu. Some of these chapter titles are rendered unused, either because the event associated with them was scrapped, or because it is impossible to save during the event where they would be used. 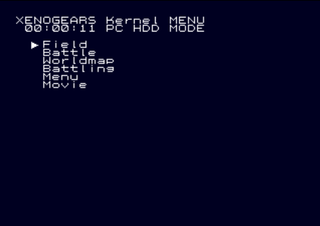 A kernel boot menu exists in the final game and can be reached by setting the bootmode to 0.