Yu-Gi-Oh! Reshef of Destruction is what happens when Konami listens to players complaining that Sacred Cards was too easy. Infamous for requiring the player to backtrack to the start of the game to sleep in order to recharge their lifepoints, a mechanic Konami themselves would later mock in two separate games.

Setting the language ID to 0x06 at RAM 0x2021CF8 skips every text box in the game. Note that the cards names have no data associated to the language ID 0x06, so you have to modify it to a value between 0x00 and 0x04 before starting a duel. 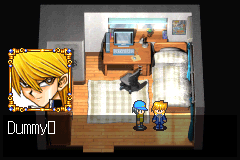 As in Yu-Gi-Oh! Dark Duel Stories, the color ID 02 is not used by any card in the game. It was most likely supposed to be used for Fusion Monsters, but they decided to make all Fusion Monster cards the Normal Monster card color instead. This is most likely because a couple of them have new effects and use the Effect Card color.

Even though the US version doesn't have a language selection menu; every dialog, menu, and card in the game is translated in French, German, Italian, and Spanish in the US ROM. The only thing missing is location names, as only the first location, Clock Tower Square, is translated, meaning the European localization was not entirely finished at that point.

Most menus from the Japanese version are still present, but they are not displayed properly in-game, as the necessary font is no longer present.