Presumably, this line would have been spoken by Trusdale (known as Solomon Muto in other English Yu-Gi-Oh! media), who appears when the player tries to use a deck with less than 40 cards.

In the final game, the player can't add any more cards to their Deck once they reach the limit. The dialogue is based on the Japanese version, which only allows the player to include 50 cards total between their Main and Fusion Deck.

In the Japanese version, Trusdale appears if the player tries to trade a card when no cards are in the Trunk. This doesn't happen in the localized version, but the dialogue was still translated.

The Trunk is referred to as the Bag, just like in the Japanese version.

These strings are listed after "ENG" and "JPN" in the ROM. This implies that a European release was considered for the game.

There are multiple unused effect prompts in the game. Most of the prompts seem to have been taken from Yu-Gi-Oh! Duel Monsters 6: Expert 2, which Eternal Duelist Soul takes some elements from.

If a character is selected on a certain day, they will challenge the player to a Match instead of a regular Duel. After the Duel, the player will receive a specific booster pack.

All of the dates (except June 28) are based on Japanese holidays or celebrations. Holidays marked with a * have been abolished or moved to a different date since the game's original release.

The game received a massive overhaul when it was localized. Some of the changes come from Yu-Gi-Oh! Duel Monsters 6: Expert 2.

In the following sections, Duel Monsters 5 refers to the Japanese version, while Eternal Duelist Soul refers to the localized version.

Duel Monsters 5 contains an intro movie. After the company and series logos appear, there's a shot of the Rare Hunters. The game then cuts to manga panels of various opponents in the game and follows with close-ups of Yami Yugi and Kaiba. Finally, the intro ends with a shot of the Dark Magician and Blue-Eyes White Dragon facing off. If the player waits on the title screen long enough, then the intro movie replays.

Eternal Duelist Soul lacks an intro movie. Also, the series logo is replaced with a "Licensed by Nintendo" screen.

After the player starts a new game in Duel Monsters 5, they are prompted to enter a name. This name can be changed later. 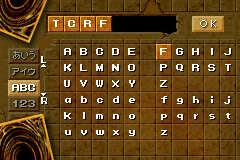 Each 40-card red, green, or black starter deck is generated from 11 different pools of cards. The contents of the pools differ between each version. The player receives a stronger starter deck in Eternal Duelist Soul.
Also, the player can immediately check their starter deck in Duel Monsters 5.

Duel Monsters 5 contains a mode called D-Tactics, which teaches players how to play the game. The player is given a pre-constructed scenario and must win the game in one turn, similar to the Duel Puzzles of later Yu-Gi-Oh! games. There are six puzzles at the start; once all six are cleared, six more are unlocked. There are 24 puzzles in total.

Translations of the puzzles can be found here.

In Eternal Duelist Soul, Option was removed and was replaced with Record and Password; "Trade," "Duel," and "Deck & Bag" were renamed to "Card Trading," "Link Battle," and "Deck Edit"; and the background was changed to a sky. 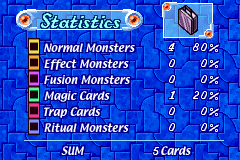 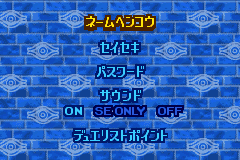 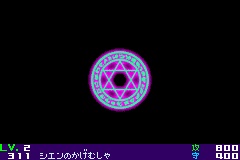 The graphics for declaring a regular attack and a direct attack differ between verisons.

When the card was re-released in Japan, it simply required the player to pay 1000 Life Points to activate the card. All versions of the game use Toon World's original Japanese effect, but Eternal Duelist Soul lists the updated effect text.

The following bugs are present in Duel Monsters 5. They were fixed in Eternal Duelist Soul.

In Duel Monsters 5, the Duel Computer copies the player's deck, which is consistent with its behavior in the anime and manga. In Eternal Duelist Soul, it uses a fixed deck instead.

In Duel Monsters 5, most of the booster packs are based on real Japanese booster packs. Some changes were made in Eternal Duelist Soul:

In Duel Monsters 5, the weekly and monthly Yu-Gi-Oh! magazines are based on the real-life Weekly Shonen Jump and V Jump magazines respectively. In Eternal Duelist Soul, the magazines are referred to as "Weekly Yu-Gi-Oh!" and "Yu-Gi-Oh! Magazine."

When the player wins the National Tournament in Duel Monsters 5, the credits play. No credits play in Eternal Duelist Soul. 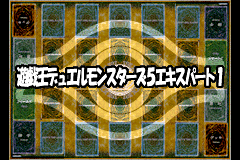 The following oversights are present in Eternal Duelist Soul.

The following bug is present in all versions of the game.