Yu-Gi-Oh! The Sacred Cards is an RPG that covers the Battle City arc. It was the first game that allowed players to use all three two Egyptian God cards. Unlike the previous two games, this game and its sequel continue the pre-OCG rules of older titles.

The game has two hidden passwords that can be used once per save file. There is also a third password that is exclusive to the Japanese version.

The Japanese version has a third hidden password. After the password 25232415 is entered, Yugi will say, "Yu-Gi-Oh! Duel Monsters 7!" at the title screen. If the save file is deleted, Yugi will no longer announce the game's title until the password is re-entered.

In the Japanese version, the letters and symbols are split into five sub-categories. The player's name can only be up to four characters long.

In the localized versions, all of the letters and symbols are on one screen, and the player's name can be up to eight characters long.

In the Japanese version, players can use the Select button at the name entry screen to jump between the five naming sub-categories. If the player presses the Select button in the original North American version, the icon will jump to the fourth empty space at the right of the screen, which originally contained the letters of the English alphabet. Pressing the A button does nothing.

In the European version, pressing the Select button on the name entry screen does nothing.

The localized versions use the original Japanese artwork for most of the cards rather than the censored artwork used outside of Japan. However, contrary to popular belief, some of the cards in the localized version were still censored. The censorship is inconsistent; for instance, a couple of female monsters had their cleavage removed, but most of the cleavage was left intact. Also, some of the translated text still references the original artwork.

A red dress was added to cover her breast.

The background was changed and the guns were edited to look less realistic.

Most of the blood was removed.

The hexagram was changed.

Dark Magician Girl's hexagram was removed and her breasts shrunk.

Destiny Board and Spirit Messages

Strangely, Destiny Board and the Spirit Message cards use censored artwork that is unique to this game. The letters "D-E-A-T-H" were changed to "F-I-N-A-L", but unlike the regular censored artwork, the Ouija board was left intact.

The guns were edited to look less realistic and parts of its body were recolored.

The word "GOD" was removed from the hand.

Fairy of the Fountain

A white dress was added to cover her body.

A green dress was added to cover her body.

The artwork no longer depicts a man burning at the stake. However, the text still references the original artwork.

A dress was added to cover her body up.

The monster was no longer cut apart by the wire and the background was changed.

The infected man was removed and the background was changed.

A dress was added to cover up the woman's cleavage.

The hexagram was changed.

The tip of the harpoon was changed.

The tanuki's navel and testicles were removed.

The girl's cleavage was covered up.

Blue scales were added to cover the woman's body.

The girl's cleavage was removed.

Some Japanese text was removed from the Aquarium and the player's street. Fish were also added to the Aquarium's sign.

The hexagrams in Arkana's chamber were changed. A similar change was made to the card Spellbinding Circle.

The mat in front of the card shop says "WELLCOME!" in the Japanese version and "WELCOME!" in the localized version. The text on the store sign was also changed to "CARDS."

In the Japanese version, Yugi, Joey, Kaiba, Yami Yugi, and Yami Marik have short voice clips at the start of their turn. Ishizu also has two voice clips when she gives the player Obelisk the Tormentor. These voice clips were removed in the localized versions.

In the original North American version, the option to sacrifice a monster is called "Sacrifice". The European version changed this to "Tribute", which is the term used in English Yu-Gi-Oh! media.

However, Ritual Spell cards use the term "Tribute" even in the original North American version.

The Summon icons were also changed. Any abbreviated terms are listed in parentheses.

In the European version, the game can be played in English, Spanish, French, German, and Italian. A new screen was added to accommodate the different languages. 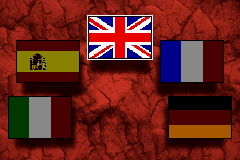 If the player tries to overwrite a save file in the European version, a warning is displayed in white text if the language is set to English or Spanish. Otherwise, it's displayed in yellow text. All other versions of the game use white text for the warning.

The North American Double Pack re-release has several changes, most of which come from the European version.