Bejeweled 2 is, as you may have guessed, the sequel to Bejeweled. It's also relatively large compared to the first game, with a bevy of new modes and new special gems plus some beautiful background graphics and music.

Offset 127, with tempo 128. Interestingly, this is the third track that plays when you place the CD into a CD player, but doesn't appear anywhere in-game. In the source tracker, this sequence in the source tracker is called "Get Ready!" as this might imply that this is played when you start a game in the main menu.

Offset 128, with tempo 125. A leftover duplicated fragment from the track that plays when you complete Puzzle Mode. Additionally, this sequence in the source tracker is called "Complete!" as it might imply that this might play after you complete a level. Likely was not going to be used as the music would have to stop to play this, then fade back in the main level loop tracks of Classic or Action.

Offset 144, 145, 184, each with tempo 125. These sequences are attached to each other at the end of the music tracker file. The first two sequences here are possibly scrapped for being too similar/early version of the track Schein. Additionally, offset 184 is a fragment of Final Destination on offset 168 heard at the end of Puzzle mode as well. This file is called "Mists of the Past/Totenschein" in the OpenMPT source tracker. Skaven has said that he did want to use Mists of the Past, but didn't get to, so he didn't want to delist it so it appears at the end of the IT file.

Offset 115, 116, each with tempo 128. Unlisted sequences that do not appear on the music tracker file's surface. It seems to be an early draft of the song "Schein".

A very high-detailed and shiny loader bar. The used one is more energetic.

An unused score widget. Interestingly enough, a prerelease image has a section in the middle which also has this shine, texturing, and palette.

The unused loading bar from Bejeweled is also in Bejeweled 2, still unused.

The slider knob from Bejeweled Deluxe.

According to this download source, with an included digital signature MD5 hash by PopCap themselves for authentication, Bejeweled 2 might have had a planned expansion pack that was scrapped for unknown reasons nearly a year after the game's release.

Running the installer would place new files under the C:\Program Files (x86)\PopCap Games\Bejeweled 2 Deluxe\images\backdrops folder, which includes a variety of 12 new backdrops under the codename planetpack. Besides these images, no such attachment or modification of files is done by the installation.

Version 1.1 was coded to have backdrops.lst updated with detection of new images being uploaded onto the backdrops folder, after executing the game. Version 1.0 prior lacks such a feature, however.

Without official sources, it is inconclusive calling it as an incomplete puzzle pack as nowhere does the installation process mentions an update to Puzzle Mode - perhaps a major backdrop update only.

It is also worth mentioning most or all backdrops were later reused in Bejeweled Twist.

A portion of source header files and a precompiled header file are present in the data directory in the Mac OS X version (one of the files has no data, unfortunately). How exactly the developers did the same mistake in Zuma Deluxe is an unsolved mystery. Interestingly, a file called test.h is also present which is pretty much a generated resources file for testing, however this one only has most audio files listed, but SOUND_LEVEL_UP and SOUND_MENU_CLICK are defined in the file, unlike the final game's resources file which suggests they were internally renamed in development. ProfileMgr.h was carried over from assumedly Zuma.

Under the Japanese localization, an unused folder named _dump can be found within the data folder, with contents of what consists to be game development leftovers. As these images are not under the usual images folder where all the graphics of the game are usually stored, they are independent and cannot be manipulated to appear in-game through the modification of the configuration files.

An HTML file is present within the folder that displays the five development images as thumbnails, while also showing size, transparency, and resolution info. 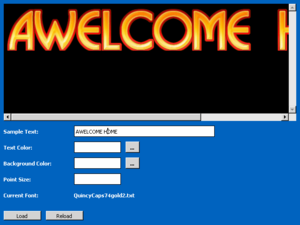 A window screenshot of FontTester from the PopCap Framework, loading img0001.png for the characters. The tool can load a font descriptor file to preview rendering of related text using the characters. Such a program is nowhere to be found within the game's files.

The full text that is linked towards the image of img0001.png. This text by itself is either scrapped out from the final game or used for demonstration purposes.

A 64×64 black square that is duplicated twice but with sequential file names; there is a possibility that it might have served as the base background for img0001's text generator program.

resources.xml contains an entry for a debug font, which is as the path implies, Continuum Medium.

The game's executable has full support for loading from a main.pak. Unfortunately, PopCap never released a version of the game using one and the game does not read the music directory in a PAK.

The game executable mentions a CVS directory in the root of the game installation that doesn't exist, suggesting the game was built off CVS version control.

Pressing CTRL + ALT + D will play a sound to indicate that debug key input is enabled, allowing unique keys and key combinations to be typed for debugging displays or mechanisms, another use will disable it.

The Japanese version uses rather different-sounding voice sound effects for "No More Moves" and "World Complete", sounding comparatively "clearer" and "panned" to the ones featured in English releases.

Notably, the former file is used in all releases of the Xbox 360 version.

In the Japanese version, levelup1.ogg can also be found under the sounds folder as an unused voice sound effect, not present in the English versions.