There are a handful of Digimon still in the game that were evidently going to be included but were scrapped for unknown reasons. Most of them still work within the game, but special items have to be used to Digivolve to them, which need codes to get, further making the items themselves unused.

The metal version of Etemon. Can be obtained with the unused

This is actually IceLeomon. Can be obtained with the unused

A more metallic version of Megadramon. Can be obtained with the unused

Giga Hand item. Considered an Ultimate-level Digimon, just as it should.

This Digimon is referenced by the unused

Electro Ring item. Hacking the item into the player's inventory and then using it hangs the game.

This Digimon is also referenced by an unused item, the

Moon Mirror item. Just as with the Electro Ring, using this item hangs the game. 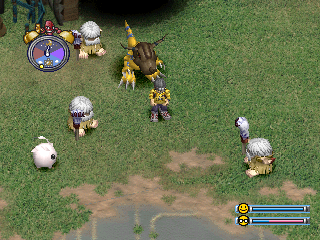 There is a simple debug room within the game that would allow the developers access to various things in the game. This "room" is basically the area with Jijimon's house only with various Jijimon actors that do different things. It can be accessed with the following GameShark codes:

After the code is activated, enter the area with Jijimon's house to get to the debug room. This will remove Agumon from the city, but won't change anything else.

Alternatively, a method can be used to access debug mode on an official PS1 console where the lid can be opened to stop the disc from spinning mid-game. This method requires no third-party cheat devices. Unbeknownst to the player, debug mode is entered at the beginning of every new game after the CGI cutscene finishes. Under normal circumstances, the player is spawned onto a plane that immediately teleports the player as though moving from one screen to another before the screen even fades in. The interactive cutscene with Jijimon and the others around the player then starts as normal. Interrupting the disc reading process by opening the PS1 disc tray and stopping the disc from spinning beforehand will prevent this plane from spawning, but leaves the rest of the area intact. When performed correctly, you will have multiple Jijimon around you and can continue as documented below. Note that at this point, you may close your disc tray, but the plane will respawn if you return to this screen and you must carefully avoid it to continue in debug mode.

The following is a documentation of everything that is offered with the debug code. The Jijimon are designated by their locations in the picture above.

This Jijimon's first screen comprises White, Blue, and Red listed three times each, all in their respective colors. The second screen then tells the player's exact in-game play time. It's not until the third screen does this Jijimon tell you that he's in fact Mr. Warp and gives you options of where to go:

The first screen actually refers to Tokomon as Jijimon. On this screen, Tokomon tells how many lives the player's current Digimon has. On the sceond screen, Tokomon is not Jijimon anymore, yet he claims to be Mr. Digivolution. Whatever he's called, he will digivolve your Digimon into one of the following: 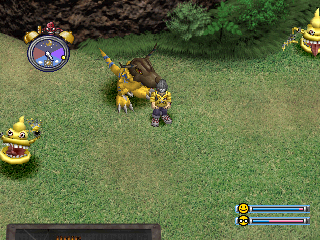 If the player ventures to the area of Native Forest that contains the entrances to Drill Tunnel and Mt. Panorama, they will find a couple Sukamon, one sitting still (right Sukamon) and one meandering (left Sukamon), that also do debugging stuff.

This Sukamon's first screen simply tells the player their current in-game play time, like one of the Jijimon did. His second screen tells the player what type of Digimon they have in the form of a confirmation-type question. And that's it.

The game features 22 different tournaments, including the Beetle Cup. However, only 21 are normally accessible. The Royal Grade Tournament can only be played by overwriting the actual tournament with this one before entering in the arena. You can use the GameShark code 30158C90 0005 on the French version to access it. (The code is untested on other versions.)

Another way to enter without any code is to use Piximon to overwrite the current number of seconds into the tournament value before entering in the arena. To do so, speak to Piximon (before 12 o clock in the current day) in the town shop when 5 seconds have passed in the current hour and cancel its dialogue by pressing Triangle when choosing to buy the training manual or not.

Unlike in other tournaments, any Digimon of any kind can be met here, (including ultimate and in-training Digimons) but all their stats, including their HP, aren't actually programmed, so they will be 0, which causes them to die right after the battle starts. This also means there's no way to lose... ''unless you force your HP to 0 with another code to tie a battle.'' (but why would you do that anyway?)

Prizes also aren't programmed, so winning this tournament doesn't give anything to the player. But entering in it with an ultimate can decrease the tamer level if a yellow tournament was selected before.

A video is available here to explain the tournament.

A door blocks entry into the tree house during the entire game, but a graphic shows the tree house open instead. Although the door can be moved with hacks, there is nothing inside and no warp associated with the area.

Change the value at 00A0E00 to 21 to enter an earlier version of the Mt. Panorama Spore Area. This version is much larger than the final, and the palette for this area is missing. It has three paths to choose from - The upper left and right both lead to Mt. Panorama Plains, just at different sides. In the final version of this area, you can only enter the right path from this part. If you leave the area from below, you're taken to Path Thru Mt. Panorama as opposed to the forked Spore Area (which is where you would normally enter the left side of Mt. Panorama Plains from). The computers are also placed differently, although they are linked to the final version of the area, meaning that if you grab the items from here, the computers won't have any new items for you if you load the final map afterwards. The used version of this level can be found at 234, far away from the values for other areas in this level.

There is an unused warp in Freezeland that can be accessed by glitching out of bounds. In the area that contains Whamon, move to the far left of the screen and keep moving up and down until your character goes out of bounds. Keep moving left and up a bit and you'll be taken to 'Native Forest'. The game appears to load garbage data.

Some areas in the game can never be entered by any normal means and are left unused. They become accessible by using the cheat code 8013C08C 00XX on the PAL version (replace the XX by the area ID). Most areas are just a glitch screen with nothing interesting to see whereas some others are playable. The video shows the actual areas able to be explored with their IDs in decimal.

Digimon World while released to Korea on PS1 but was also ported to the PC being called 디지몬 월드. This version is not a 1:1 port, it contains changes to the GUI and more.

The game itself runs too fast on modern PC's so playing it can be a bit strange.

The game has added real time shadows and also plays at a 4:3 aspect ratio like the PS1.

The video cutscenes are from the US version of Digimon World and have been squished to 4:3.

The sound quality in this port has also taken a hit compared to the PS1 version.

You can save anywhere you want in-game, unlike having to wait for your Digimon to fall asleep or saving at Jijimon's house.

In-game items that are in the overworld have different graphics which appear to be squished versions or smaller version of their PS1 counterparts.

The credits for beating the game are the same to the US version of the game.

With the game itself being in Korean it's hard to say what else has changed but to play the game make sure to set your computer's unicode to Korean or it will not start, you also either need the disc in the drive or the ISO mounted to your PC.