Digimon Battle Spirit is a one-on-one fighting game based on the first three seasons of the Digimon anime. It's also a bare-bones port of the Japan-only WonderSwan Color game Digimon Tamers: Battle Spirit.

Despite the GBA's superior hardware, the game still looks and sounds just like a WSC game, even preserving that system's lower resolution with a permanent border.

When a Digimon digivolves during battle, the WonderSwan version plays one of three different themes: shortened instrumental renditions of the songs "Brave Heart", "Beat Hit!", and "EVO" from the Japanese version of the anime.

While all three still exist in the port, they're not used in-game and cannot be listened to using the sound test. 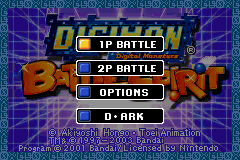 Tiles and sprite data for a "D-Ark" menu option, for linking up to D-Ark Digivice toys, are left unused in the GBA version. The sprites have just been moved off screen. This menu option was only used in the Japanese-language mode of the original WonderSwan game, while the English-language mode omitted the option there as well.

While many graphics from the original WonderSwan version have been removed, some are still present in the GBA port: tiles (and possibly sprite data) for the stage names in multiplayer mode and the options menu still survive at 0x9E100 and 0x9FCA8 in the ROM.

Carried over from the WonderSwan game is a version string for a presumed Dimps tool at 0x1F9D4: