The Lee twins put their differences aside to take on a far deadlier foe, who quickly makes things that much more personal. This port of Double Dragon's sequel implemented the co-op feature that was inexplicably missing from the first NES game, as well as some funnier-than-intended cutscenes. G - R - A - S - P !

There is a common debug feature in a couple of Technos games. Usually, all debug code is controlled by a memory flag, hardwritten at the end of the ROM at address $FFF6 in M6502 CPU address space. Various bits of this variable enable or disable various debug features. 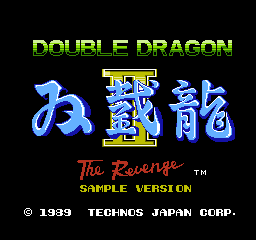 Bit 7 of the debug variable (to set it, use the Game Genie code EKNYVYAA) switches between normal and "SAMPLE VERSION", which enables some debug features. During the game, hold the Select button on Controller 1, then press one of the following buttons:

Bit 5 of the debug variable (to set it, use the Game Genie code AXNYVYAA) enables "Free Walk" mode, which allows you to walk to any part of a level instantly.

There are three different sprites for Marian, who appears just before the final battle in Mission 9. The first one on the left is the one that is used in the game while the other two are unused. 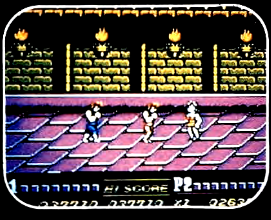 The manual for Double Dragon III: The Sacred Stones, which features a plot summary of the second game, uses a screenshot from an early version of the game in which one of Marian's unused frames is used. The palette also appears to be different from the one used in the final game. 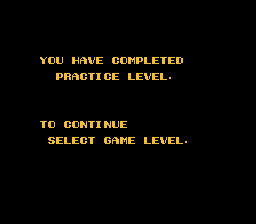 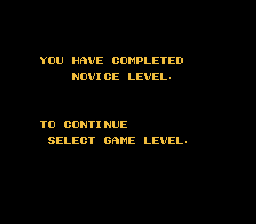 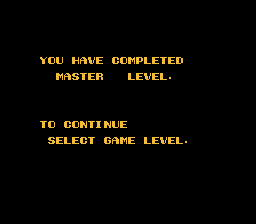 There are unused text strings in all versions of the game for what appears to be early versions of the ending messages that you'll get when you complete the game on one of the lower difficulty settings in the non-Japanese versions. Apparently the WARRIOR difficulty was originally called NOVICE. There also appears to be a message for when completing the game on SUPREME MASTER (originally called simply MASTER), even though the final version of the game contains no similar message and simply plays the ending sequence. These can only be viewed during debugging.

"Acclaim presents" was added to the top of the US and European versions' title screen, causing the logo itself to be moved a bit lower and the single Copyright line removed. 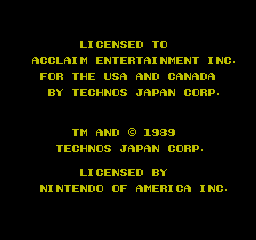 All the Copyright information has been moved to a different screen in the international versions, which is displayed just before going into the main menu.

The HUD is four lines higher in the international versions compared to the Japanese version, partially obscuring some of the scenery.

The story sequences before each stage were originally written in English during the development of the game. In order to make room for the hiragana and katakana font sets, the majority of the images were rearranged within the CHR and reduced in size for the Japanese ROM, resulting in some (mostly subtle) differences between versions of the game. Mouseover for translations.

The final image in the opening cutscene in the international versions is a shot of Billy Lee posing and yelling dramatically. This image is missing completely in the Japanese version and instead, the opening ends with the image that comes before that, which is a closeup of Billy's eyes, but the image is much wider, showing his temples.

The international versions have an extra blue line to the skyline above the helicopter and lack the random gray tile at the upper left corner of the image that is in the Japanese version.

The island, sea, and helicopter have more details in the international versions.

The image is a bit wider in the international versions, adding extra details to the trees on the left and right sides.

The roof above the main gate is colored differently and some of the tiny columns in the middle portion of the temple are uneven in the Japanese version.

The closeup of Billy's face is slightly wider in the international versions and the background behind Marian has been recolored.

There's extra bits of flesh-colored pixels next to Billy's mouth in the international versions and Abore's hair was changed from blond to brown.

An extra pixel tile next to the Mysterious Warrior's right shoulder (on our left side) is missing in the Japanese version. 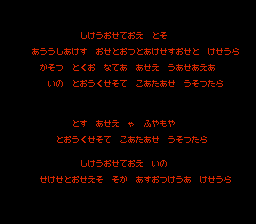 The Game Genie code PAKNYAAA re-enables the copyright screen from international versions of the game, but because of incorrect CHR bank settings, the text displayed becomes Japanese gibberish. You can decipher what was meant to be written by simply replacing the kana for the corresponding Roman character in alphabetical order (e.g. あううしあけす=ACCLAIM). Also, the text palette is different from the one in the final international versions. 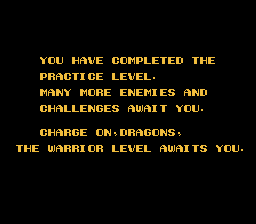 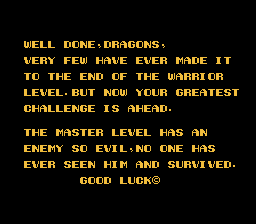 The Game Genie code PEKOYGAA re-enables the difficulty limits in the Japanese version. Messages for both difficulties are mostly similar to the ones in the final international versions, with two differences: 1) they call you "DRAGONS", instead of "DOUBLE DRAGONS"; and 2) the exclamation mark next to the phrase "GOOD LUCK" (!) has been replaced with a Copyright symbol (©).