This silhouette was supposed to be used whenever the characters got on fire, like when blown up by a bomb. They probably forgot to add it in during all that rushing they were doing, so somebody did not set up us the bomb.

This fiery background was supposed to be in the pits and flames of the Japanese version's final area.

The game was supposed to have cutscenes throughout the game, but they weren't implemented due to, you guessed it, rushing it out the door!

Here are portraits of Billy and Jimmy. Hilariously, Jimmy is sporting a mullet.

A cutscene portrait of Steve before his boss fight.

Japanese Kana that would've gone along with the cutscenes, had the game not been rushed and they were actually implemented.

Track 10 in the Japanese version was meant for the battle against Duke after going through the rest of the Great Hall.

The Japanese release is a slightly later build of the game and features several significant differences and additions from its Western counterpart.

Only the Japanese version has a flashing "PUSH START BUTTON" text. 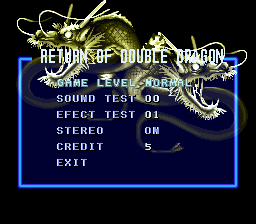