Connect your copy of Hatsune Miku: Project DIVA to the PlayStation 3, spend some extra money and you get a better version of the game, even though some of the features (and a song) aren't present for some reason.

In sound/adx, all of the BGMs used on PSP is present. However, out of all of them, only psp_home.adx is used. The rest aren't referenced anywhere in the game's code.

Used during the gallery on PSP.

Used in DIVA Room on PSP.

Used for the credits on PSP. However this seems kind of odd being in the files at all, since it's unused and takes up a lot of data due to the credits being 10 minutes long. The file name is also misspelt as "stuff" instead of staff.

Used during PSP's title screen. In this game the title screen just plays a sound when the logo appears.

In the ranking directory is a JPEG image that says "Now Printing". A similar graphic with the text was used in the Arcade game for printing a certificate. Ranking was also an addition in the Arcade game to view rankings online, so it may have been planned at some point. 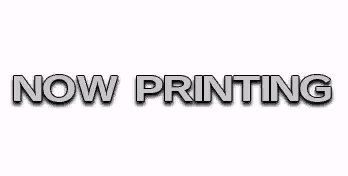 Another Now Printing graphic exists in spr_ps3_songcmn.farc. This is oddly used for Sakura Rain's preview image, most likely as a placeholder for it.

In the 2d directory, there's several graphic files leftover from Arcade before the game was released, but they're all empty.

Within rob/mot_AUTH_MIK.farc, there's several unused animations in it for Miku. Some of them are just copies of used animations. These were removed from Dreamy Theater 2nd. However, their motion names still exist in mot_db.bin, and their camera(?) data still exists in auth_3d/MIK.farc.

Interesting, a few of these motions were actually officially used at [1] the MikuFes09 concert. They, for some reason, ported over the concert animations maybe for testing.

The rest of the characters only have the walking animations, however only Haku and Neru also have their pose motion for their static images. All of these motions were completely removed from Future Tone, except MIK_Z000Z005. However, the rest of the characters still have all their camera(?) data for their motions in Future Tone. All of Miku's was removed except said motion.

There's a list of all the song files with the file names for them, directory they're in, and names of the songs, including Sakura Rain without the file name, and a dummy one simply called dummy.aix. However, after pv_032.aix, which is The Disappearance of Hatsune Miku, the list keeps going with more songs that don't exist in the game from pv_037 to pv_050, which are all of the DLC songs from Diva 1, like Two Breaths Walking for example. They may have been planned at some point to be in the game, but cut for unknown reasons.

Within the game's code is an unused file format for movie files, which is most likely an Arcade leftover, as during this time Solitude's End used a video file for the PV. Unlike Diva F which uses .m2v, .pam for the Opening, and .avc in the Vita version, this game uses .wmv, which is a Windows Media Video file. There's also a string for this for pv_db to load a movie for a PV called .movie_file_name, which is what Diva F uses for movie files. However, it doesn't work because the movies may have just been disabled. At this time, dsc files never used a function to play and display movies. That later would be a function in Diva F. Along with this is also a removed movie file called diva_adv.wmv, which may have been Diva 1's opening. This still exists in Dreamy Theater 2nd and Dreamy Theater Extend.

However, if played on an emulator (according to Dreamy Theater 2nd and Extend in this case because this game isn't playable on emulator due to the requirement of hooking up your PSP to the game every time you play, but it's most likely the same case in this game anyway), if .movie_file_name is set in pv_db.txt with the location for the movie set, and no movie file is set in that location, according to the log the game does try to load the movie, as it says the file is missing. But even if the file is there, it doesn't play at all.

This string for pv_db is for extra songs, like for the Rin and Len versions of Song of Life and Song of Wastelands, Forest, and Magic. However, those are separate PVs in this game, so it goes unused. This is however used in Dreamy Theater 2nd for said extra songs.

These strings are for pv_db to add Extreme difficulty and Encore difficulty, but Extreme goes unused in this game and Encore unused entirely. These do work in the game however, but not at the same time. If both Extreme and Encore is added, Extreme doesn't appear. Along with this, Extreme is spelled incorrectly in-game, as it's spelled "EXTREAM". When selecting a song, when choosing the difficulty the text uses "NORMAL" by default because no text is present for Extreme and Encore for them. Only outside of the selected song.
Encore is also unfinished. All it uses for its own difficulty in this is the text on the song select. For this, it requires Extreme to be set because for some reason it loads a .dsc file from Extreme instead of Encore, making Encore useless in this game. However as of right now, it's unknown if it was updated later, as this game uses unfinished files and code of Project DIVA Arcade before it was released, but modified a bit. 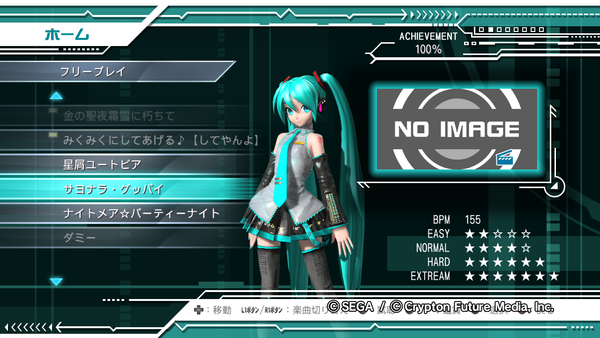 Encore in-game (since there's no room for it, a part of the menu covers the text a bit). 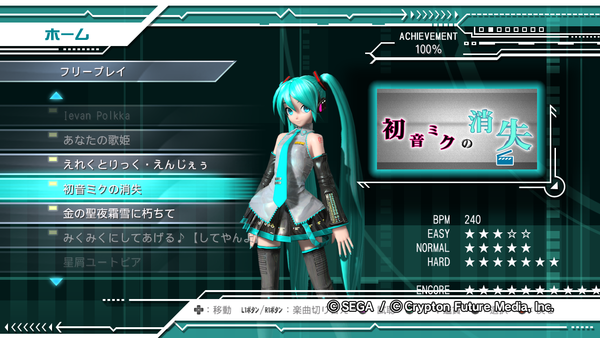 The difficulty during a selected song (Encore). It uses Normal's data by default for this screen. Same with Extreme. The difficulty icons are also closer together, making some of the text unseen in this case. 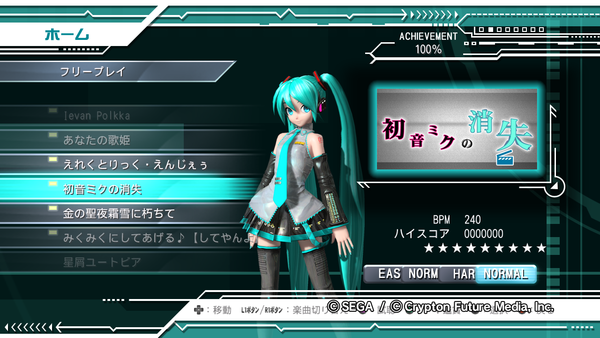 When Encore is selected, the confirmation screen uses Extreme's text (or "EXTREAM") instead of Encore's. Extreme still uses this text however. 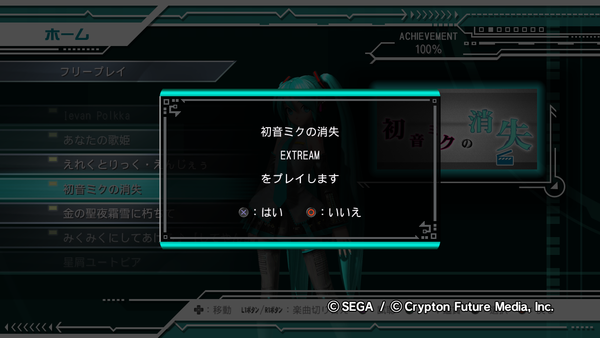 Extreme and Encore uses Normal's text as well on the start screen. 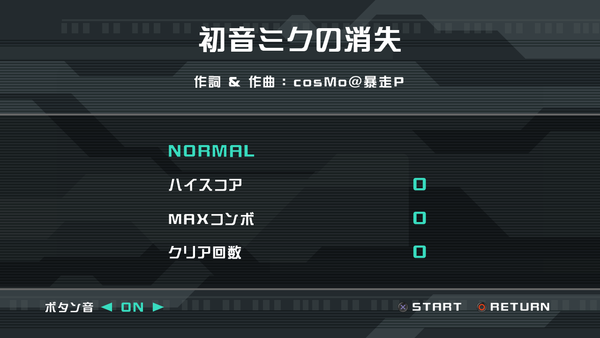 Same thing with the results screen. 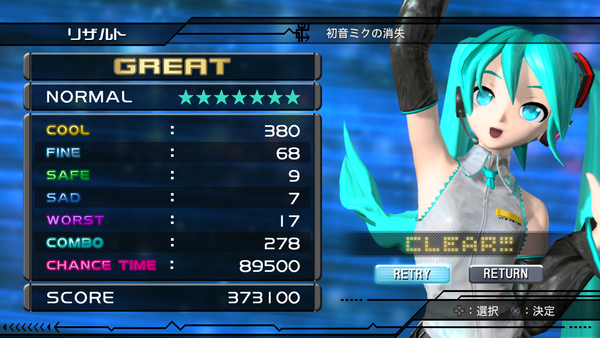 In the script directory, there's several dsc files meant for Arcade. All the normal songs also have an empty Extreme dsc meant for Arcade, and The Disappearance of Hatsune Miku has an empty dsc file meant for the removed difficulty, Encore (pv_032_encore.dsc). Along with this, Golden Holy also has an empty Encore dsc (pv_029_encore.dsc), meaning this song was also meant to have an Encore chart, as it was the 2nd hardest song in the first Project Diva. This Encore dsc was removed later on, so the charts were probably never made. Disappearance's stayed in however with a full complete chart after this game, and it's still in Future Tone's files on PS4.

The other Arcade dscs however all have no data, except for 3. Stardust Utopia (Normal only; pv_201_normal.dsc), Sayonara, Goodbye (Easy only; pv_402_easy.dsc) and Nightmare☆Party Night (Easy only; pv_405_easy.dsc). Stardust Utopia has a quad multi press note at the end of song, meant for Arcade, but it doesn't work in this game, as all the buttons can't be pressed at the same time. Also, songs pv_407-pv_410 were never actually released at the time of this game's release, so they were probably in development. pv_406 was never released at all, as it was removed. The rest of the songs are these.

Moon has a few disabled motion names that appear to do nothing.

There's strings for Sakura Rain that is completely unused. It was planned at some point, but it was removed due to copyright issues. It can be restored into the game, and it's still in its original spot on the song select from PSP, still uses its original sky blue tag, and uses the Now Printing image. Songs added to the song select that weren't in the PSP version are ordered by PV slot number under the original PSP list. They also have no tag. 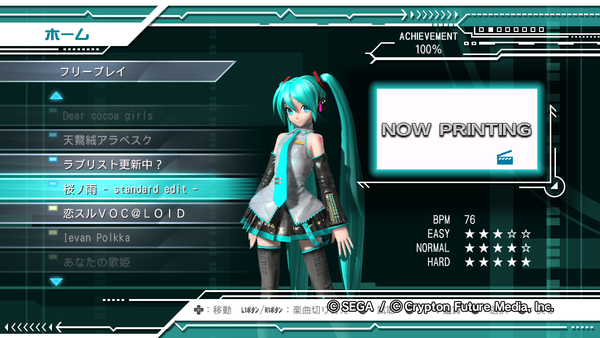 In string_array.bin, there's leftover text for the Xbox (and some PS3) version of VF5 for loading online rankings.

In sound/csb, all of Arcade's sounds that were added into the game before its release, or for the first release, are present. This includes Arcade's loading screen sounds, coin insert sound, etc. They're in the files se.csb (some sounds in this file are exclusive to Dreamy Theater), se_adv.csb (same situation as se.csb), se_cmn.csb, se_over.csb, se_result.csb, and se_sel.csb. The csb files are still present in Dreamy Theater 2nd and Dreamy Theater Extend, but they were all dummied out. The Arcade sounds that were in se_adv were also removed, however only 5 sounds from Arcade are still present in the other Dreamy Theater games in se.csb; sys_coin, sys_time, card_recognition_success, card_recognition_fail, and Thankyou_For_Plyaing. The Thank you for playing sound is spelled incorrectly for some reason, and still is in Future Tone on PS4.

When edits are imported from PSP, and an mp3 file is chosen from PSP, the game creates a new location on the PS3 for the mp3 in NPJB00047-DATA\USRDIR\*USERID*\USERXXXXXXXX\DATA\SONG_EDITXX.mp3. Though however, the mp3 can also be added to a location in the main game data as well in NPJB00047\USRDIR\DATA\SONG_EDITXX.mp3, and it does have some differences. Normally, the edit can't be played because it doesn't read the mp3 file in that directory while the song is being played. However, if the song ID is changed in the save data to one of the default ogg ones from the main game, the song can be played, but the preview still plays the mp3. When the song is loaded however, it plays the selected ogg changed in the save data instead. Along with this, the edit will also play very slowly. Not the background scenery, but just the PV itself like cameras and chart data. There could be unfinished code for this specific location for the mp3 file. This still happens in Dreamy Theater 2nd and Extend.

Along with this, there's module values for each song in the save file for when the player chooses a different module for each song. This isn't a feature in this game, as the player can only change modules outside of Free Play, rather than by song. This also becomes a feature later in Dreamy Theater 2nd.