James Bond Jr. is a video game based on the animated series following the son nephew of James Bond.

The parachute sprite is unused in both the prototype and final versions of the game. 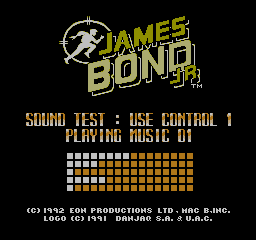 Enter 012345 for a Sound Test, complete with visualizer. Note that this will always open at track 06, the title theme.

The following passwords give you more ammo/lives and power than the game normally lets you have.

These passwords would appear to be dates: 17 January, 1967 seems to be programmer Chris Shrigley's birthday, and the others might be those of his children.

Track 3 in the NSF file is an unused song, which does not appear anywhere in the game, including the sound test (though it does appear as track 3 in the sound test of the prototype version, John Smith: Special Agent). It was later re-used in Ferrari Grand Prix Challenge, another game Neil Baldwin composed the music to.

A hidden copyright message is present in the US and European versions:

The RESET routine of the US version uses the string "euro!" to check if the game was hard or soft reset. In the European version this string is moved down and ran out of the ROM size, so there is only "e" left, the rest is cut out by the system interrupt vectors, which is used instead of this string for the same RAM test.