Being one of the very first ports of the game, Minecraft: Xbox 360 Edition introduced many new people to the famous sandbox game, and allowed players to play Minecraft on the big screen. Later on in its life, it and other Legacy Console editions (as they are referred to now) introduced features such as minigames, presumably to fill in the server-shaped gap in console users' hearts.

Because this is a near-direct port of the original Java Edition version of the game (specifically Beta 1.6.6, with later updates adding features from later versions) from Java to C++, enhancements and limitations aside, practically all of the unused content from the original game is present here, making this one of the most unused content-rich ports of the game.

Hidden in the game files are a lot of leftovers from the GUI of Java Edition, including curiously a gui.png file that seems to match up with Classic 0.30, a pre-alpha version of Java Edition.

In Java Edition, this block cannot normally be obtained in Survival or Creative mode, and must be obtained via console commands. In the Xbox 360 version however, Command Blocks are completely unobtainable in-game due to a lack of an accessible console. It can, however, be obtained via save file editing or modding. When obtained and placed in a world, the Commmand Block sadly does not work properly as it does not have a GUI associated with it. Despite this, it does appear to be able to react to Redstone pulses and even execute certain commands - in earlier versions, it is possible to make it run a /tp command (teleporting the player) with further save file editing, however it would not leave a console message and this functionality would later become non-functional. In later versions, the chain and repeating variants were even added to match later Java Edition versions, however these variants also do not work properly. Oddly, there is a tooltip string for the Command Block, simply stating "Used to execute commands."

Just like Command Blocks, this block cannot be obtained in Java Edition without console commands, and cannot be obtained legitimately in this port at all. However, when hacked in, they are fully functional, acting exactly the same as their Java counterpart, even showing the "no" sign on all barrier blocks when holding one in your hand. Interestingly, barrier blocks are used in the Shrunk glide map to prevent the player from going out of bounds, and the barrier blocks used to be in the Update Aquatic tutorial world, but it got removed. Barrier blocks can be obtained with pick block in game, or with inventory editors (tile id 166 or minecraft:barrier). The tooltip for this blocks states "An invisible but solid block." 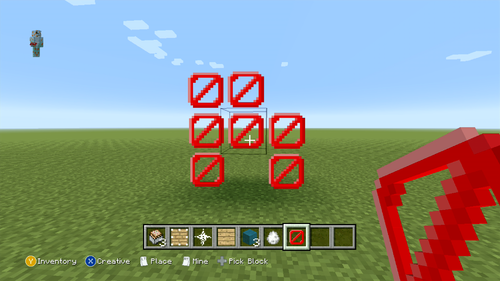 The locked chest was an April Fool's joke added into Minecraft (Java) Beta 1.4. Since it was an April's fools joke, it was quickly removed. However, the block still exists in the game and was even ported to the Xbox 360 Edition with tile id 95 (later replaced with white stained glass). When placed, it decays after a few seconds like leaves, and gives off light like glowstone. 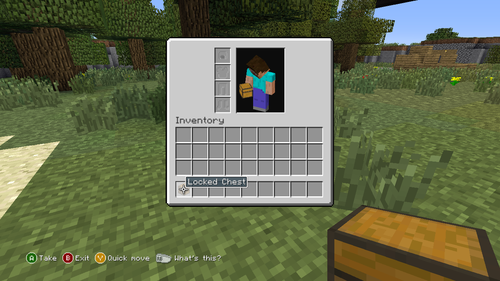 The Locked Chest shown in game.

minecraft:debug_fourj_item may be an item used by 4J Studios to test new item and entity behavior. It does nothing when used, and has the texture of an barrier. It has no "What's This" hint and no name.

Although they were added to version 1.9 of Java Edition, Spectral Arrows also exist in the Xbox 360 version too. However, they're normally inaccessible and they lack their glowing outline effects, leaving them as regular arrows.

Like its non-mobile counterpart, the Minecart with Command Block can't be obtained legitimately in this version of the game, and can only be obtained with console commands in Java Edition. It appears and acts as a standard minecart, unfortunately. It has an unused "What's This" hint, stating "Used to execute commands on the move!" 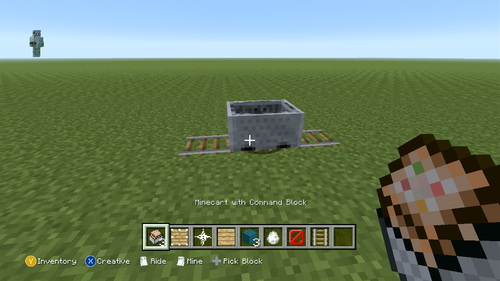 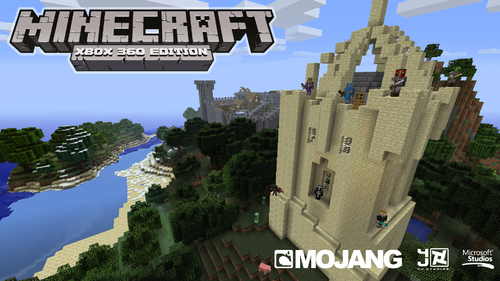 A debug menu exists in the game. It's currently unknown how to activate it in-game, but it can be accessed with hex editing. The debug menus only work on TU1 and below. Later updates disabled and added more debug menus, such as schematic creators, item editors, fill area, and much more. Supposedly, the debug options were accessed by a hidden "Debug Settings" button in the xur.

Originally, you could take a screenshot in game and post it to Facebook, but this got removed for unknown reasons. This feature still existed in TU25, but was later removed in an unknown update.

In early versions, pressing exit game while the game is running in trial mode will display a screenshot. It would cycle through 8 different screenshots. However, after an unknown update it will just display an empty screen, possibly because the screenshots were never updated.

There is a theme that was supposed to be unobtainable after Facebook functionality was removed, but retrieving it is still possible. The player must have the physical version, the updates on a thumb drive, and be on their account. First, the player disconnects from the Wi-fi and enter the game. If the player is on TU11, go to settings, then proceed to where you re-obtain the rewards, and select the theme. The theme will then be given to the player.