Minecraft is a sister game of the Java version... except it includes micro-transactions, the ability to use your Xbox Live account, controller support, and to top it all off, has cross-platform support. Formerly Pocket Edition, this is now the main version of Minecraft, dropping the subtitle with the Better Together Update.

The Camera allowed players to take snapshots from wherever the item is placed. It was somewhat buggy, though, and the photos taken with it tend to be obscured by the camera's own smoke particles. The texture for its tripod and item texture were replaced with the "chirp" and "blocks" discs respectively in Alpha 0.2.0. It was made invisible with the icon changing to an egg in Alpha 0.8.0 and was removed altogether in Alpha 0.9.0. The item was brought back for 0.14.0 but then removed in 0.16.0, and it is now only used in Education Edition.

This flower was replaced with the Poppy in Alpha 0.9.0.

There are several items in the game that can only be obtained with inventory editors. 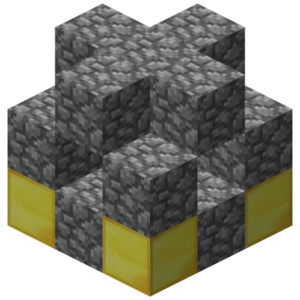 The correctly-built structure in 3D at a 45-degree angle.

Before the implementation of the actual Nether, this was the main block required to access a large nether-like tower (made out of netherrack). In order to activate it, you had to place certain blocks at certain areas.

When correctly activated, the time will immediately be set to night, the tower will be made, and Zombie Pigmen as well as other various items will spawn inside it.

It will also say the following in the player chat: Client message: Activate!

The following items are spawned inside the tower: 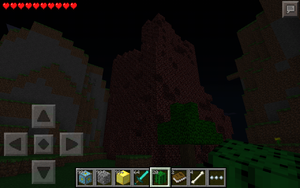 After a certain amount of time, the tower will start to decay as shown in this photo.

If the player attempts to use this block without using the proper block pattern, it will say the following in the player chat: Client message: Not the correct pattern!

For some reason, after the functionality of the block was removed from the game, the textures for the block were updated to use the texture for the Plastic Texture Pack.

Before the implementation of the actual nether, this was the block used after the Nether Reactor Core was correctly activated. The certain blocks placed at certain areas would become this block, and then when the tower started to decay, it became regular obsidian.

A placeholder block added in Pocket Edition Alpha 0.1.3, which uses a modified dirt texture with "update!" written on it in a grass texture. There is also a similar placeholder block that appears to say "ate!upd" which has, since Alpha 0.8.0, been corrected to say "update!". To add to this, there is another variant of the block named "reserved6" that is just a copy of the normal block. 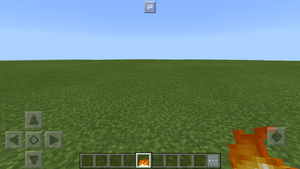 The Fire item in the player's hand.

This block reserves ID 51. When you place it down, the sound that plays is the sounds that wood blocks would make when they are being pressed.

A note on configuring the rarity bar.

A note on configuring the skin selection screen.

A ton of debugging material is released on every build of the game. Almost every single option does not work in retail builds which also hides their sections.

On a debug Windows 10 version, keypresses can be used to activate interesting things.

The Debug section has many options.