A spinoff to the ever popular game Minecraft, Minecraft Dungeons takes the series into a new direction and turns it into a Diablo-like dungeon crawler. Definitely not the first thing that comes to mind when you think 'Minecraft Spinoff,' but it's decent for what it is, at least.

Chickens from the original Minecraft! They do appear in the final game, but only as hostile mobs (yes, you read that right.) These versions were to be completely passive, much like how they were in the original game. It would've appeared alongside the equally unused Enchantsmith.

An unused merchant in that was added into the game files alongside the Echoing Void DLC, but was never added into the game. It would've charged gold to change a random enchantment on weapons and armor. They would've also spawned alongside the unused passive variant of the Chicken.
Strangely, the Enchantsmith's main texture was updated in the 1.15.0.0 update. The Stall and UI did not change though aside from the new lighting and the bugged banner.

A type of villager that would've increase the power level of the player's current gear using the also unused Diamond Dust item. They were most likely replaced by the Blacksmith.
The location of their stall in the camp was later taken by the Gift Wrapper in update 1.4.3.0

A villager who would've given quests to the player, similar to the Mission Map in the camp. They were added in the Creeping Winter DLC, but have yet to be implemented in the game.
In the game files, they are referred to as the Quest Giver.

An unused hostile mob that was found in the Dungeons Beta, but went unused in the final game. Regardless, it still existed in the files of the game until being removed in the 1.2.0.0 update. The Mage was capable of levitating the player up and then smashing them back down, stunning and damaging the hero, similar to an Iceologer. The player couldn't attack when it is lifted by the Mage. Despite not appearing in this game, they do appear fully functional and used in Minecraft Dungeons: Arcade.

Also referred to as the Jack O' Lantern Trap. They would've blended in as a regular pumpkin before revealing themself and firing pumpkin seeds at the player. They appeared in the Dungeons Beta, but have yet to be implemented in the final game.
Interestingly, the Jack O' Lantern's audio is marked as item SFX, despite it being a mob.

A variant of the Spider enemy who appeared in the Dungeons Beta. It was removed in the 1.7.3.0 update, however. This mobs texture seems to be taken directly from the Minecraft mod Twilight Forest, as it is pretty much identical to the Hedge Spider from Twilight Forest.

An unused consumable item, which would've been used to upgrade the power level of a piece of gear or artifacts. Although it appears in the Minecraft Dungeons Guide Book, this item has yet to be implemented.

A variant of the Pickaxe item. It is unknown what it would've done, as although it can be equipped via hacking, attempting to use it will crash the game. There's no official sprite for it, though one of the developers stated that it looked exactly like a banana on a stick.

An artifact that would've been used to revive dead players within its vicinity, similar to the Totem of Undying from the base game.
It had the description of This totem radiates powerful protective magic.

An artifact with an unknown function. Only exists in the form of texture and model files.
Uses the "Blank Amulet Rectangle" model, indicating that it wasn't fully finished before being scrapped.

An artifact that was originally intended to be obtained as a reward from the Luminous Night Seasonal Adventure. Only exists in the form of text.
It had the description of All artifacts in the zone get 1 second cooldown.

Previously known as Curious Armor, Ender Armor was an armor set that like the cut Mage enemy, appeared in the Dungeons Beta. However, it was unable to be acquired. When equipped, it had a 5% chance to teleport players when they took damage. Also like the Mage enemy, it is fully functional and able to be acquired in Minecraft Dungeons: Arcade.
It had the description of No one knows where this strange armor came from but it seems familiar to you.

An armor that was originally intended to be obtained as a reward from the Luminous Night Seasonal Adventure. Only exists in the form of text.
Judging by the name, it was likely a Unique rarity item for the Soul Robes.
It had the description of Armour property that lets most applicable artifacts have two charges that can be used without cooldown in between, like how the multiroll/multidodge enchantment works.

An enchantment meant for melee attacks. This would've given the player a chance to knock back enemies after a melee attack. The chance increases with each tier.

This enchantment was meant for ranged weapons, as the name implies. Any ranged weapon enchanted with Bow's Boon grants the player and their allies a damage boost for every arrow that passes through them. This has no graphics associated with it, and it's tiers are unknown.

An enchantment known as the Barrier, having a Powerful rarity.

While mobs can use these enchantments, the player cannot, leaving the icons for them unused.
Noteː while Withering also cannot be obtained by the player, it doesn't have an icon.

A scrapped hero most likely planned for the Echoing Void DLC. It was added to the game files in the 1.5.0.0 update, but was left unobtainable.
It can still be readded to the game via modding as it is still listed in the Skins DataSheet, but has the IsReleased tag set to False.

Original design for the Hero Cape that lacks the Redstone Monstrosity face.

An unobtainable cape that has a hammer on the back.
It had the description of This cape is the mark of blacksmiths and soldiers.

An unobtainable cape that resembles the Minecon 2015 cape with an Iron Golem's face on the back.
It had the description of The Iron Golem Cape, made to honor the mighty protectors of Villagers, now belongs to you.

An unobtainable cape that was added in update 1.8.0.0. The runes on the back translate to 5/26, which is the release date of Minecraft Dungeons.
It had the description of While no one can decipher its cryptic message, the Mystery Cape seems made for you.
Strangely, if modded back into the game, the player will not rotate when equipping it and it will have the origin listed as Included in the Hero Edition, Hero Pass, Ultimate Edition, and the Ultimate DLC bundle.

An unused pet that was meant to be obtained in the Luminous Night Seasonal Adventure. All that remains of it is the Info Blueprint file and the text that was added into the files in the 1.15.0.0 update.
It had the description of Never fear, the teeniest little spider is here.

An area that was likely to be added in the Flames of the Nether DLC. All that's left of it is a few files referencing it.

Another area likely planned for the Flames of the Nether DLC, which all that remains are files for it.

An unused area/mission that appeared in the files of the Dungeons Beta. It has a mission description relating to it, which is all that remains of it.

A sub dungeon that would've likely been used in the Echoing Void DLC, first appearing in the files in the 1.7.2.0 update, but was later removed in the 1.8.0.0 update. The files contained no information other than the filenames. 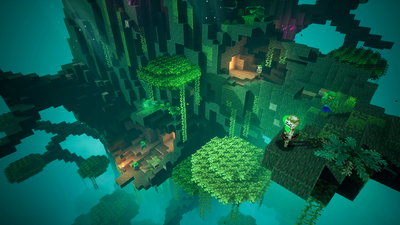 An area that was likely planned for the Jungle Awakens DLC. Not much is known about it outside of the loading screen graphic that was strangely added to the files in the 1.15.0.0 update.

Sounds for the Totem of Soul Protection activating.

Sound for equipping the Totem of Soul Protection.

Sounds for equipping the Ender Armor.

An excerpt of the title screen music. This theme is present in the Original Game Soundtrack as part of the Opening Cinematic (Extended) track.

An unused theme that would have originally played when the player defeated an Enderman. This theme is present in the Original Game Soundtrack as the third part of the Enderman track.

A shorter version of the Nameless One's boss theme. It is not called by any SoundCues so it goes unused.

Two music tracks that were intended for a Jukebox. They originate from Vanilla Minecraft, where they are Stal and Blocks respectively.

A pair of unknown heroic-sounding tracks marked with the rero prefix, not much is known about what they were intended for.

A second part of the credits theme that isn't used in-game. This theme is present in the Original Game Soundtrack as part of the Ending Cinematic (Extended) track.

An alternate end part of the Vengeful Heart of Ender boss theme. Defeating the boss goes straight to a cutscene, rendering this unused.

There are a number of music tracks that are pitched differently in-game compared to the files, due to using a pitch multiplier in their SoundCues.

The splash art that is shown if you do not own the Echoing Void DLC is strangely an older version of the splash art shown in promotional material.
This early version shows an earlier design for Watchlings and Snarelings.

The Endersent holding the Eyes of Ender have completely different names in the files than what is used in-game.
It is likely that these are names that they had earlier in development.

The filename for the Magenta Tower Wraith refers to it as being green.
This is a remnant from earlier in development where it was green, as seen in prerelease screenshots.