Minecraft: Story Mode is a point-and-click adventure game created by Telltale Games, made due to the extreme success of Minecraft. A second season was released in 2017.

In the environment for the Order Hall, the back of the buildings have back-face culling. If you take the camera out of bounds (either with a free camera or using an external program i.e. Cinema 4D), you can find an interesting addition from Telltale - a crying creeper face, telling the rest of the dev team to not shoot from that angle, lest the player see the culling! 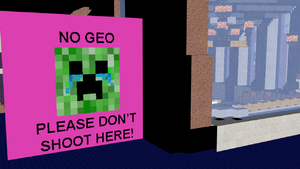 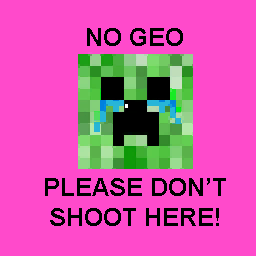 In the game files, there are unused files for Lukas' original model which were seen in the Mine-Con trailer for Minecraft Story Mode.

There is a large amount of cut music in the game, however most of it is just variations of tracks that did get used. Some got uploaded on the Antimo & Welles', the composers, official YouTube channel, however most is still never heard anywhere officially.

Several unused parts for Action Suspense. Most likely meant to make scenes that used the track more interactive with the music, but in the end only 3 different variants of the track get used.

There are 4 different parts for the track, but only 2 get used. It's possible that the other 2 parts are for after you finish building the fireworks dispenser.

Judging by it's name, it was likely meant to play during the scene where Reuben gets stolen by a butcher at EnderCon. In-game, parts of the Ivor track play instead. Similar to the Endercon DJ track, this track has the Ivor motif.

Seems to just be 2 used parts of Darkness stitched together, but with a unique intro that is never used.

Judging by the name and the sound at the end of A, these were likely other candidates for the sting to play at the start of the Building Competition. What ended up being used was 3 sound effects. Fireworks Sting B also actually ended up being used, but in the scene for the reveal of Gabriel the Warrior at EnderCon instead.

Out of the 16 parts, only 5 get used. Some seem to have been made for the main menu, which ended up just getting already used tracks being mixed live in-game to sound like the unused ones, however most of their original uses are unknown.

A very different mix of Ivor.

Out of the 5 Library tracks, this the only one to not be used (which is pretty sad considering one of them even has "Temp" in the name.) Probably meant for one of the Library scenes.

This funky Library track never got used, and it's unclear where it would have been used since it doesn't really fit the context of any of the library scenes. It's possible it would have been used in the Library scene in Episode 4, which had a part of Ivor with drums over it, but it's unlikely that music for that episode was being made this early on.

Probably meant for the scene in the nether while in the Minecarts. This is the only track of 4 to be unused.

Out of the 8 parts of this track, only 3 get used.

D (strangely, it has the SAME EXACT file name as the other D, but it sounds different.) [[File:Mcsm1 Pale Blue Dot D again.ogg]

This is a different version of Pale Blue Dot which features some stems not heard anywhere in the normal Pale Blue Dot tracks. Judging by the name, Pale Blue Dot may have originally been a specific theme

No More Creepers A

A short section of the full No More Creepers track.

An unused part of Zoom Piano House. Original use is unknown.

Another unused part of Zoom Piano House, just with a shorter name.

This track mainly only shows up after you finish and episode and it shows you the choices you made, however some parts did get used inside of Episode 5. Most still remain unused.

None of the parts for this track are used, however they seem to just be parts and stems of the Intro track that are cut to loop. They may have been meant for while you are entering The Temple of the Order of the Stone, as a couple tracks that are named "Nether" without the Temp that sound like the Intro track as well do play there.

The Rise of Johnny Dennim

This track is an early version of the used Training Montage track. In the comments of Antimo and Welles' official upload of Training Montage, Antimo replied to a comment that asked about this saying "i think there was a version of this track that was way over the top 80s sounding, when we were trying to hone in on what worked best, that we named the rise of johnny denim. though i really have no idea how we came up with that name. while i was mixing this i had an image in the corner of my monitor of john travolta in very tight jeans, maybe that's where it came from?"

Another track obviously related to The Rise of Johnny Denim, just with a different name.

An unused track originally made for the Training Montage scene, which ultimately got replaced by what's used now. Antimo and Welles uploaded this track to their YouTube channel, and said in a comment "this was our first attempt at writing a song for the training montage in episode one. i'm pretty sure we hadn't yet seen the scene when we wrote this and quickly ditched it once we did."

This track, judging by it's name, was probably made for a second Sword Build scene, as the track "Sword Build" was used when you build a sword in the mine after Petra saves you.

This track is completely unused, and it's unknown where it would've been used. What's so interesting about this, however, is at the end of Episode 4 a track named "Theme Reprise" plays, which is a reprise of this track.

With a debug mode patch, if you press in the left stick (or F1 if you're using a keyboard and mouse) on any point in the game, a Level Select opens. It shows every subsection of the current chapter by default, and shows every available chapter if you press the 'Projects' button. To the left of the projects button, there is a button to toggle cutscenes. To the right of the projects button, there is a button to select what Jesse skin to use (though it defaults to Female 1, and doesn't seem to be clickable if you haven't started any episodes.) There are also two buttons, MinecraftChoreTraining and MinecraftSandbox, which are listed here but don't seem to do anything. All eight episodes are present in the debug menu, but the buttons which open each episode tend to switch each other out.

A version of the game was released on the Netflix streaming service on November 27, 2018. The Netflix version is fully pre-rendered with updated graphics, shaders and camera angles; however, many choices and all walking and fighting sections were removed.

The Netflix version only lets you pick between the male and female Jesse with both of them being one skin color, opposed to giving you 2 gender options and 3 skin choices each. The two Jessies in the middle row get used in the Netflix version.

The Netflix version only has 2 dialogue options to select, opposed to 4. Other differences include a border around the screen, the text box being moved to the center, and the text box being given a more simplistic design with a question mark instead of an exclamation point.

Due to the limitations of being a pre-rendered FMV game, most of these features were removed.