Quake is a story about a homicidal man who likes to kill Lovecraft-inspired monsters through barely connected level sets. He also likes to murder his friends (who respawn as soon as they are killed) in castles that have a large Jesus crucified in them for some reason.

The main game doesn't have a lot of unused stuff, but there's a shitload of it in the two prototypes floating around. 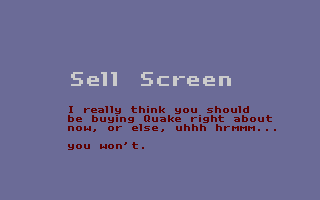 A poorly-made screen that was supposed to urge you to purchase the final version can be found hidden in the game's graphics. There is no way to bring it up in the game. This message appears in the Beta3 prototype and is unused there as well. 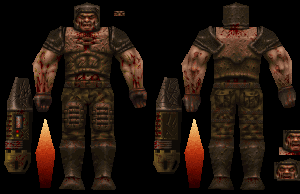 There's two early faces at the bottom right, and an unused set of eyes at the right of the face. 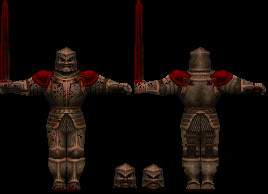 The Knight had darker skin and a different helmet design that was recycled for the Death Knight. Furthermore, much of the upperleft edges of the texture go unused due to a UV size disrepancy at model compile time. 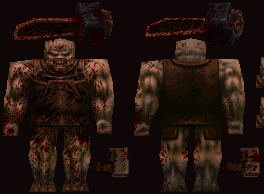 At the far right are two triangle shaped pieces of flesh. Pre-release images show the ogre having horns and this may be a remnant of that. 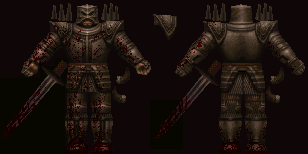 A lone clean spaulder is placed in the space between the front and back. 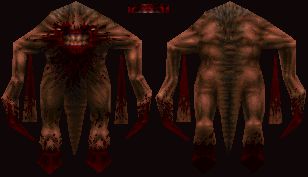 An early upper-mouth is seen in the middle. 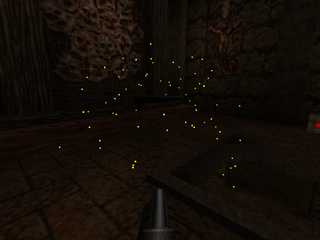 Each entity is given an .effects field to control entity-specific lighting. As spotted in defs.qc, an unused flag EF_BRIGHTFIELD appears, but is never used elsewhere in the QuakeC sourcecode.

If set, it creates yellow glowing dots surrounding a given entity in question. This effect is also featured in Half-Life, where it appears if an enemy is spawned in a wall.

defs.qc also defines EF_BRIGHTLIGHT. This causes an entity or object to emit a bright light.

Aside from illuminating a wider area, it is otherwise identical to EF_DIMLIGHT (which is the standard glow for Quad Damage or Pentagram of Protection).

An unused grunt sound for the Death Knight.

The QuakeC source code contains T_BeamDamge. This is a variation of T_RadiusDamage, without parameters for the inflictor or entity to ignore.

Intended to appear when someone tries telefragging an invincible player, but it never appears in normal play. This is fixed in QuakeWorld, as well as a community mod.

A client obituary for a dragon, not implemented in the original game. The text is replaced in the expansion pack Dissolution of Eternity, where the dragon is actually implemented.

While this boss appears, it has no attack. The only way to be harmed by it is to approach it, and it is credited to a generic trigger rather than Shub-Niggurath.

This monster only appeared in the prototype and was never fully implemented. Only this and a reference to its removed wake up sound remain.

Starting with version 1.06, there are two copies of progs.dat in pak0.pak. The old version (CRC 51103; used in version 1.01) is found at 0x580358, is 410616 bytes long, and is not indexed. The version in use (CRC 24778) is found at offset 0x116DF17 and continues to the end of the file. The index entry for the newer progs.dat file also contains semi-random characters to prevent triggering the anti-modding mechanism in the Shareware version. 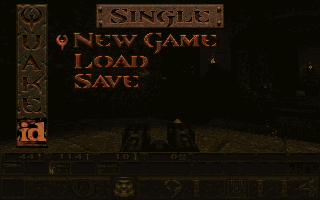 Version 1.07 (first included with Scourge of Armagon) and all subsequent versions removes the brown fade effect in the menu. The reason is for performance, as reading pixels from video memory is very slow and it's much faster to write a black dither pattern instead, especially for high resolutions.

The only trace left of the fadescreen code left in the released GPL source was recently discovered as a dummied out "gelmap" table that was going to be used as a feature to color models to a single range of colors, but was scrapped.