Quake III: Revolution is a port of Quake III Arena to the PS2 with content unique to this version. It features a single-player campaign with character stats and skins unlocked through progressing in the campaign that give you higher stats, new game modes, and new characters.

Since you can't have text chat. nor can the bots initiate any chat, this sprite goes unused.

There are also three chat bubbles from earlier in Quake III Arena's development, the last image also appearing in the earliest available prototype.

A bare background with text, as well as a mockup image of a loading screen.

An image of an early copyright splash screen, reflecting an earlier interface design, and two placeholders for French and Italian copyright screens.

Unused static screens of company logos are present. The game uses videos for the logos instead. Bullfrog does not appear at all.

Remnants of a scrapped Catch the Chicken game mode remain in a level header image for The Keeper and Asylum.

The thumbnail image reflects The Very End of You, but in reality the map is an earlier version of the first arena in Arenas of Pain. The interface's name for this map is Space DMZ.

House of the Desolate, the first arena in Hero's Odyssey was slated to become a small arena map for multiplayer. Only these images remain.

Similarly, the third arena in Arenas of Pain where the Vadrigar is first fought was to become an arena for Single-Weapon deathmatch. The map seems fully functional, so it's unclear why it was scrapped, as it only seems to lack a thumbnail

The game also contains a few .arena files with information for maps and gamemodes that aren't actually present in the game such as Malevolent Cathedral, another map by Dan Haigh, who designed House of the Desolate. 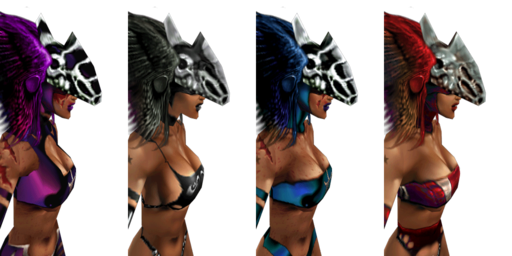 The character Hunter has additional skins in LINKFILE.LNK with numbering that follows the pattern of other unlockable skins (which is 00 through 04 appended to the end) despite not being a playable character in the single-player campaign. 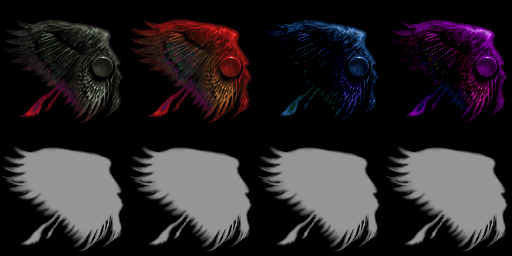 The feather textures used for the skins. The alpha has been channel separated and is displayed below. 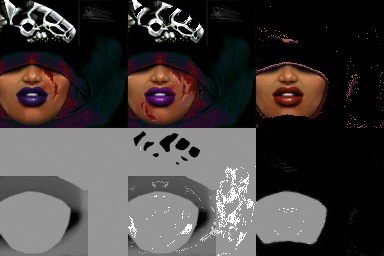 The face textures used for the skins. The alpha channel has been separated and is displayed below. There are four texture files present with the leveled skin name pattern, although one of them appears black when forced onto a wall. 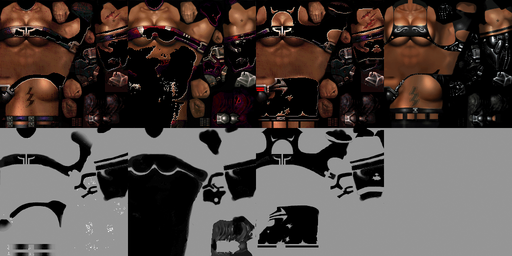 The body textures used for the skins. The alpha channel has been separated and is displayed below.