Quake is a story about a homicidal man who likes to kill Lovecraft-inspired monsters through barely connected level sets. He also likes to murder his friends (who respawn as soon as they are killed) in castles that have a large Jesus crucified in them for some reason. This 25th Anniversary version adds improved graphics, a new expansion pack, cross-platform multiplayer and curated add-ons, including, uh, Quake 64. Oh yeah, and it's the first digital re-release of the game to finally include the Trent Reznor soundtrack.

A number of test levels, largely intended for testing Bot AI behavior, are still present in the maps folder of id1/pak0.pak. A square arena bordered by pillars, blocking the line of sight of various monsters seen from Episode 1, with two Enforcers right in front of the player back at the start. Some weapons, health and ammo are also present.

The "Mal" in the filename is likely referencing John "Maleficus" Dean, an AI programmer at Id. 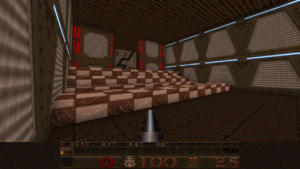 A room with varyingly-tall barriers, leading up to a door-textured barrier you can't jump over. A Rocket Launcher sits in a second room beyond the barrier.

A corridor with a door, and a button for opening it. On the other wise of the door is a Rocket Launcher with a pile of ammo. 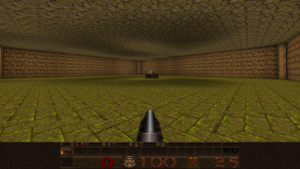 A very large, empty room with a Rocket Launcher and a pile of ammo in the center. Similar to test_button, but without the button. Instead, the door can be opened by shooting it. 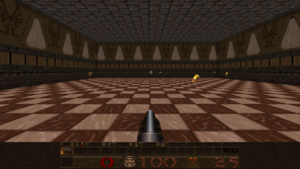 Similar to test_aiming, but littered with Rings of Shadows. An empty, unlit corridor with wall textures that have fullbright elements. 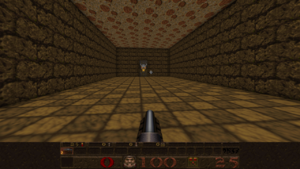 An empty, rectangular room with a devil-head texture on one side of the room. Presumably used for testing bot AI. 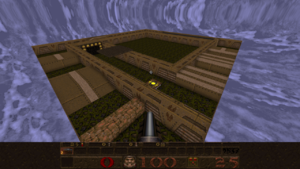 An obstacle course! Features various obstacles to jump over, several invisible teleporters for if you fail a jump, and a jump pad right at the end. Walking into the slipgate teleports you back to the start. An empty, rectangular room with a Rocket Launcher and a pile of ammo at one end. Two greyboxed areas showcasing the real-time lighting showcased in the Dimension of the Machine maps. A corridor with a short staircase with a ledge that drops down - not far enough to get hurt, but far enough that you can't jump back up naturally - leading to a Rocket Launcher and a pile of ammo.

The alternate version of Episode 1's finale from the original Shareware demo. The 2021 remaster does not have a demo, therefore...

Another shareware hangover from the START map.

The unused obituary in the original Quake for getting killed by the unused Dragon enemy. Filed under strings for Scourge of Armagon, for some reason, despite Scourge not having a dragon.

The unused obituary in the original Quake for somehow getting killed by the final boss, whose damage is instead handled by a generic trigger.

The remastered models in id1/pak0.pak/progs also include models for the health and ammo pickups. However, these don't appear to be loaded by the game, instead using their original BSP-based forms.

Of note is that the health boxes have their design slightly altered in these remasters, to replace the red cross with a similarly-sized glowing square. The health boxes in the final release are not altered, apparently due to a quirk of the Red Cross's copyright on their design (Apparently it has to be on a white background!)

A selection of texture WADs (used for level editors - BSP files embed their textures when compiled for ease of distribution) were mistakenly included in the PAK file and are present in id1/pak0.pak/gfx:

This unused placeholder texture, "backpack", is present in items.wad, and consists of a slightly squished Doom backpack, presumably from when the backpack item was still a BSP box instead of a .mdl model.

In the included Quake 64 mod, q64/pak0.pak/src.txt contains a piece of source code for what appears to be an internal utility to read and work with the Quake 64 ROM data.