Wherein the Doom Slayer meets his most horrible nemesis yet: An actual plot.

Using a memory editor like Cheat Engine to enable console commands then using the command g_enablepistol 1 will let you use an otherwise-unused Pistol weapon - which, surprisingly, is actually new and not just a leftover from Doom (2016). Primary fire is a three-round burst, while alt-fire zooms in for a more powerful shot.

In the "Mars Core" mission, glitching or cheating your way back into the area the opening cutscene plays and touching the door you initially emerge from at the start of the cutscene will teleport you to the level's Developer Room. This small, greyboxed room contains teleporters to each section of the level, teleporters to the start of the level either with or without the intro cutscene, and a BFG-9000 pickup. The pickup is clearly unfinished, lacking the rotating animation or shader effects of all the other weapon pickups, on account of the weapon being acquired in a cutscene in the final game.

Interestingly, the "PHOBOS: Supergun" teleporter takes you to an area that's only seen as part of a cutscene in the final game, but is fully set up as a playable area with collision and a "bottomless pit" trigger for if you jump off.

The complete soundtrack from Doom (2016) is present in the sound banks, filed away in the soundmetadata file under "music\music_doom2016\", and is still setup for the dynamic music system. These files are actually completely different from the jukebox tracks and "BFG Division" reprise on the Fortress of Doom level, which are filed away separately with the rest of the Fortress of Doom's music under "music\music_ghost\music_menu\music_ghost_switch\hub_music\hub_music".

Some duplicates of the Doom and Doom 2 MIDI recordings used for the Doom Classic sourceport on the Fortress of Doom's computer are present filed under "music\music_ghost\music_menu\music_ghost_switch\tutorial_switch". The version of "The Healer Stalks" was used in pre-release public demos in the greybox tutorial level used to teach players about the movement and combat mechanics before shoving them straight into Mars Core, presumably the other tracks held a similar place in internal pre-release versions of the game.

The second half of 679091008.ogg (filed under music\music_ghost\music_menu\music_ghost_switch\icon_music\music_ghost_states\boss_end), after the used cutscene music, is a brief cover/arrangement of Into Sandy's City from Doom 2 that the developers were ultimately unable to find a place to slip into the game. It eventually ended up being used in the same place in the ill-fated official soundtrack release, with the ending King Novik monologue overlaid over the ending.

473482882.ogg (filed under debug\prototype_music_Tlocke_do_not_use) is a strange clip of music from an unknown source, to be used as a placeholder. The name presumably references Technical Designer Tim Locke. 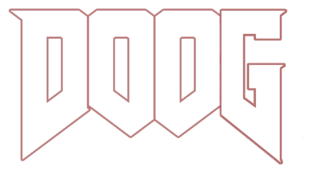 With the release of the "The Ancient Gods, Part One" DLC on October 20, 2020, pressing the dedicated Chainsaw button four times while on the Runes tab of the Dossier would bring up a "Doog Eternal" logo. This is a reference to Inugami Korone, a Japanese Virtual YouTuber who livestreamed Doom 64 and the 2016 Doom and, among other things, found great joy in the Chainsaw weapon and gained a nickname of "Doog Slayer" (a play on the fact that she's a dog). The logo actually combines two separate images of "Doog" and "Eternal".

The v3.1 update (released October 23, 2020) removed the Easter egg, with the update post acknowledging this and praising the community for finding it so quickly, but never actually giving a reason for its removal.

If "The Ancient Gods, Part 2" is installed, in "DOOMEternal\base\video\cineractive\e5m4_tech_boss\death_of_dark_lord", there are early drafts of the demons being obliterated following the death of the Dark Lord. They are missing visual effects, contain unfinished animations, and lines from the debug console in the top left. Interestingly, the sounds are embedded with the video unlike the rest of the pre-rendered cutscenes which are silent and rely on the sound in-game.

These drafts can be found as: