Quake III Arena is the best of the multiplayer modes of Quake and Quake II mixed with a great movement system. It owns so much that there's a (formerly free) version named Quake Live that can be played online. It is also notable for being one of the sources of those irritating announcer soundfiles that every Counter-Strike server has.

It's also known for its public testing process for feedback over the course of 7 months with various publicly released small prototypes.

A fully coded Grappling Hook can be summoned via cheats. While it functions properly, its graphics are very incomplete; the model is covered with a temporary texture, the "chain" is a lightning bolt, and the actual "hook" looks like a rocket. It does not precache the lightning shader when it loads, so if the map lacks a Lightning Gun, the "chain" will appear as a white null texture.

There are a few glitches with the weapon. First, if the player grapples onto something, then picks up an item, they will switch to the new weapon, but will continue to grapple even after they reach their destination. The only way to break free from the grapple is to take out the Grappling Hook again.

It is unknown why it was cut. It would fit Q3's fast-paced style very well, but there could've been problems with people getting into unwanted and exploitable places via the Hook that would've made it easier to scrap the entire thing than redesign certain levels around it.

There are some unused announcer sounds corresponding to character skins. Presumably there were plans for more bots in the Single Player campaign at some point.

Two Sonic Mayhem tracks (sonic3.wav, sonic4.wav) are not used by any map in the game. They equal a total of 39.5MB in size and make up the majority of the unused content in disk space usage. They would eventually end up getting used in Quake Live.

Introduced in the 1.27g patch release, there are files in pak4.pk3 pertaining to several bots never implemented in the game (didcotmassif, malaki, tim, trillian, xian). In addition, there are bot files for Team Arena that go unused in the base game (fritzkrieg, pi, taa, tad, tao).

Tim, Trillian and Xian are id software employees, and didcotmassif is a member of the (now defunct) OldManMurray forums.

This duplicate crosshair image can be seen ingame by setting cg_drawCrosshair to -1. 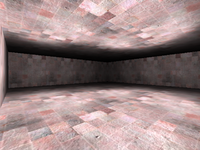 An unused test map (test_bigbox.bsp) can be found in the /maps folder inside pak0.pk3 (pk3 files are actually just zip archives, change the extension to open them).

It is a tiny square map with no items inside; only walls delimiting it. If you noclip through the walls, you'll see there's also literally nothing outside (skyboxes, textures...). Bots cannot be spawned there since there is no .AAS file associated with the map. You can access the map by typing \map test_bigbox or \devmap test_bigbox in the console (in the latter case you'll be able to use cheats, such as \noclip).

Introduced in the 1.27g patch release, there is one map-waypointfile, q3ctf5.aas in pak4.pk3, which is never used in the game. It is a duplicate of q3ctf4.aas.

A flare shader and texture are loaded by the game, but go unused. This is because the flare feature was dummied out in the engine's code before the 1.09 (DEMOTEST) release, as the implementation was broken in May 1999. Despite this fact, flares are still compiled into the game's maps; these remained unseen until they were finally revealed in modified source ports that restore and fix the missing flare code.

These flares are seen in early promotional screenshots and can be activated in certain prototype versions, in all their broken glory. The sun, however, was never seen.

These textures load into memory as the game precaches boom01.md3 and ring02.md3... however, the code remaps their shaders to other effects (rocketExplosion, plasmaExplosion, etc), rendering these textures unused. Both are leftovers from the prototypes and are also unused there.

The id models added in the 1.16n patch are some of the earliest produced content, dating back to Summer/Autumn 1998. They have a few unused textures.

Tim has unused red team textures. He has no working team skins and the included skin files use invalid paths, so these are never seen ingame.

Brandon has two early shirt designs, with the earliest dating 3 months before the Klesk-like shirt that is used.

A logo file found in pak4.pk3, introduced in the 1.25 point release. This is intended for use with the very short-lived GlobalRankings leaderboard service which went down with MPlayer. GlobalRankings support was removed in 1.27g (December 2000), so these go unused. 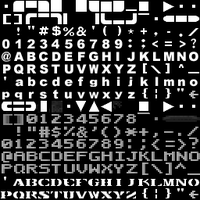 In pak0.pk3:gfx/2d/bigchars.tga, the letters of the bottom half are completely unused. The bottom characters are leftovers from the prototypes and the top is a partial Quake II carryover, potentially predating the prototypes. It is also less opaque. Both sets of fonts lack lowercase letters.

There are also several squares in the top row that are unused, but were once used in early prototypes as placeholder menu graphics.

Entities that are fully functional, but not implemented by any map in the final game.

A moving platform that functions like Quake's platform by moving straight up until you get off. It tries to play two sounds (movers/plats/pt1_strt.wav, movers/plats/pt1_end.wav) that don't exist in the final game or any of the prototypes.

Strangely, the manual still makes mention of lifts and has a picture of one, despite none appearing in the final game's maps.

Shoots a rocket at a target entity, set off with a trigger entity.

Similar to the above, but shoots a plasma ball.

There are definitions for bot text-chat that have them merrily tell you who made them. For some reason, these don't seem to work anymore, at least in the latest version (the bots only seem to respond to the "thanks" part of "special thanks").

When a bot chats a line referring to another name of the game's bots, they go through a word replacing parser to spice up the variety, determined by weight. Several of these go completely unused with a weight of 0.

The retail disc includes a pak1.pk3 file which is not installed. It only contains a few designer config files and a preset for the Mad Catz Panther XL controller.

This PK3, if installed, would be replaced in all patch releases, not including the files contained in pak1.pk3.

Digital re-releases do not contain this particular file.

The 1.25 patch is the first version to add the "Holy shit!" announcer sound when you're fragged with the enemy's flag close to your own, closely averting the capture at the last half-second. The following 1.25y patch changed this to "Holy cow!". 1.27b (Team Arena Demo) and 1.27g introduce the final sound, a re-recording of the original line.

The final sound dates only 4 minutes after "Holy cow".

The Mac version contains a minimal menu bar which is only usable in dedicated server mode. The following command, however, does nothing whatsoever:

The same dummy command reappears in Star Trek Voyager: Elite Force, without even a change of title.