Tales of the Abyss (PlayStation 2)

While the best PlayStation 2 3D Tales entry, it wasn’t available to Europe until a later 3DS port. This game celebrated the 10th Anniversary of the Tales series, and introduced Free Run. To this day, it remains one of the most popular games in the series in Japan.

On the game's disc, some voice clips for attacks that were never implemented are viewable via hacking. Only one unused arte remains in the game.

Tear had a line she was supposed to say after using Innocent Shine: "And purify all!" But the animation is so fast, it skips past this. Also, her Grand Fonic Hymn can be hacked in - it is similar to the one she will use in the final battle against Van, but nothing happens at all once it is done casting.

Anise's unused techniques, of which only voice data remain, are 'Dragon Rampage' and 'Fang Shot'. These were likely incomplete or weaker versions of her existing artes (ie, Dragon Shot). Also, she has 'Fatal strike! Valkyrie Sabre!', most definitely a skill only usable if she equips the Valkyrie accessory for Tokunaga.

Guy's are 'Dragon Swarm', and he has an unused line for Brilliant Overlord: "Behold it's splendour!"

Natalia has a tech called Chronos Raid, which actually remains in the game, but it appears to be a slower version of Piercing Line. Yet, it is an Arcane Arte, so it can be used to trigger Astral Rain. She also has voice data for 'Sting Maker', and 'Behold this Lanvaldearean Arte! Imperial Raid!'. The latter may have been another tech she could learn from Nick, a travelling archery master who teaches her Gallant Barrage and Healing Force. Alternatively, it may have been a FoF change, judging by the line before the arte name.

Dist has voice clips for a Mystic Arte of some kind, and there are two cut-ins that were for this purpose. "Behold this arte of the Rose! You will rue this day! D-Buster!" There are animations for this Arte, but nothing happens if hacked in-game.

Likewise, Asch had a second Mystic Arte, with the following quotes: "I'm done playing! Binding Doom! Now die! The weak should stay back!" He has an unused facial cut in, unlike Legretta and Largo (the only other characters that don't have facial cut-ins at all)

Largo has voice data for Thunder Beast, a FoF change of Beast. Legretta has several unused attacks/spells, namely 'Bright Fear', 'Grieving Rune', and 'Divine Field'. The latter may have created a Light Field of Fonon, similar to Tear's 'Invoke' spells. Alternatively, it may have been similar to Fatal Circle. Grieving Rune is actually a variant of Ray Satellite (one of Colette Brunel's techs from Tales of Symphonia), due to the Japanese equivalent audio clip saying "Rune Steer" (the Japanese name for Ray Satellite).

Van also has clips for an unused Mystic Arte: "This world ends now! As do you! Majestic Apocalypse!"

Reid was to have an arte called 'Final Dragon Fang', apparently an alternate name for Wyrm Wrath, a FoF change of Tiger Blade. Also, he has voice data for a Mystic Arte he used in his original game, Tales of Eternia: "Sacred Skill! This is it! Aurora Slash!" Philia has data for 'Inspect Eye', an ability she had in Tales of Destiny, and 'Revitalize'. She has no real use for the former, and the second was likely removed due to Mint already being the healer for the cameo battle.

Some cut-in graphics never made the cut in the final game. They include:

Certain unused videos can be found in the Japanese release of the game, they are located in to7MOV.cvm.

While most of the cinematics in to7MOV.cvm are Anime or CG cutscenes, AS_010.sfd contains in-game footage. A duplicate version of this video exists named SS0000.sfd.

A version of the opening that is more like a rough storyboard. The song that plays in it is the same song as the final, but the vocals are notably a bit different. The timing and transitioning of the logo fading in is also different than the final.

A version of the scene that plays when Akzeriuth falls. It lacks sound effects, instead using the Tales of Phantasia opening theme.

The scene where the Tartarus is lifted to the surface by a Sephiroth tree, it also has music playing — the main world theme from the 1989 arcade game Valkyrie no Densetsu (Arcade).

A different version of the scene that has the Tartarus diving into the core. Again, it has music playing in place of sound effects. The song playing in this video is the main theme from The Return of Ishtar: Ishtar no Fukkatsu, specifically the Arcade version.

A debug map exists in the North American release of the game. It doesn't appear that this is accessible in the Japanese version. The following codes will take you to the debug map. Unfortunately, there isn't much you can do on this map as it needs proper Japanese text. Talking to Luke or Tear will likely crash the game. Activate one of the following codes while in town or a dungeon to be placed in the debug map. 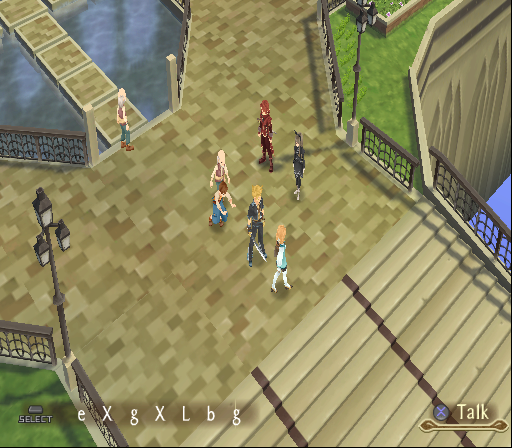 The Japanese version was infamously unfinished, making the additions done during its US localization more of a completion: many of them exist in the JP version as unused content, like unused Hi-Ougi, cut-ins, items…

It is worth mentioning that all versions of the 3DS port are based on the US PS2 version, including the Japanese version.

The main US version additions are: