The GBA Tales of Phantasia is an inferior port of both the original SNES version and the PlayStation port, but was the only version of the game available outside of Japan until the (also heavily butchered, but for greedier reasons) iOS port.

In the Japanese version, by using some cheat codes you can select a hidden, invisible option at the title screen that leads you to the debug room.

In the other versions, though, that option was completely removed from the code along with the option and the whole coding for the Sound Test, although there are translated strings of all Sound Test entries and debug options:

The debug room is similar to the one used in previous versions.

Menu graphics for the Debug mode exist in both Japanese (top) and international (bottom) releases. 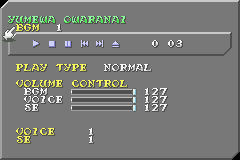 The Sound Test was removed from the American and European versions, perhaps due to the Japanese vocals in the opening theme song (Yume ha Owaranai).

Despite being disabled in the international releases, the menu graphic was updated with the changed font.

An instance of religious imagery was censored in the American and European versions. Oddly, the room is darker in the international versions, and two crosses are still shown. 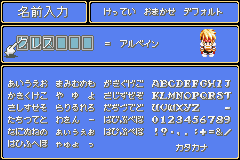 Like in the Super Famicom original, a naming screen to name your characters in your party is present only in the Japanese version.

It was perhaps disabled in the western versions due to the limited naming length (most notably, Chester's name exceeds the limit by 1). Dejap left the naming option present in the SNES fan-translation patch, but warned about the flaw.

Did you mean Kangaroo?

For the most part, the English translation is pretty solid, except for one thing: in the English script, "Ragnarok" was somehow translated to "Kangaroo". How the hell did this happen? Apparently, in the version of Word at the time, the spellcheck wouldn't recognize "Ragnarok" and would correct it to "Kangaroo".

(Source: Legends of Localization: How Did a Kangaroo Sneak into Tales of Phantasia?)

The Japanese opening, the song The Dream Will Never Die (a state-of-the-art aspect of the Super Famicom original), was replaced with a mix of two background music tracks used during the game -- "Raising a Curtain" (BGM 39) and "Aviators" (BGM 28).

The American and European versions also got the infamous English voice acting. Curiously, the European release used much nicer digital samples than either of the other versions, though at the cost of doubling the game's size from 64 Mbits to a whopping 128 Mbits!

There's apparently a prostitute in Midgars. This was "censored" in the English versions by changing the character's name from "woman" to "man" without changing the female sprite or any of the text. 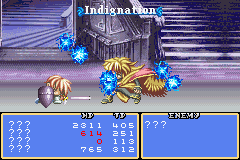 In the European version, battle cries during battles would get subtitles in little white characters on the top of the screen for each language. It'd be a nice touch if it weren't for the drastic FPS drops. 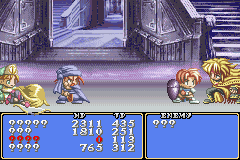 In the English versions, three question marks would appear for each character's name; however, in the Japanese version, a question mark replaces each letter of the characters' name, resulting in a seemingly random arrangement of question marks.

There's a few unused items in this version of Tales of Phantasia but interestingly enough, a few of them are PS1 exclusives. Another interesting note is whenever you re-enter the main menu, it will FORCEFULLY remove these items from your inventory. 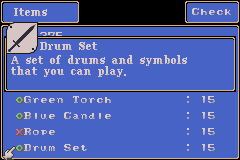 First up is the Drum Set item. This item exists in the original version of Tales of Phantasia on SNES. It'd open a new menu in which you could play cymbals, drum lines, etc.. However, this item may be here in the GBA version but it's not usable and doesn't open the menu. 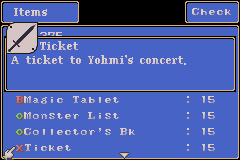 This item was used in PS1 version of Tales of Phantasia where you could hear a concert in the bar in Alvanista. However, if the icon is anything to go by, the event is probably not in the GBA version but they may have been prepared to add it in. 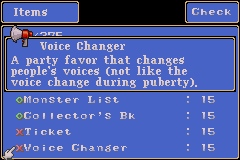 This is an interesting one. This item does exist in the Japanese version of Tales of Phantasia on GBA. This item will change Mint's voice actress to that of her original one with newly recorded lines in a much deeper tone than the SNES version. 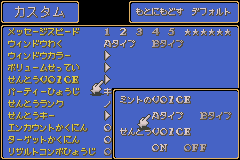 When the Voice Changer is collected, in the Custom screen underneath "せんとうVOICE", it'll have more options now. Select the first voice option and Mint will have her new voice.

Of course, this doesn't exist in the English version of Tales of Phantasia GBA but nonetheless the item is still there and assumable still functional if the value is set for the voice to use. 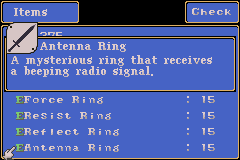 This one is unexpected. This item was used in Tales of Phantasia PS1 to allow for another controller to be plugged in and play as one of the other characters in battle. Funnily enough, if this is equipped on anyone that's not in the first PC slot, they can ALSO be set to semi-auto and auto! However, if you try altering their shortcut skills it'll crash the game. From the looks of it, it doesn't get read in battle either. So it's plausible that they were attempting to do a multiplayer option but scrapped it very, very early on.

This is unfortunately another unused but stat wise is a functional item, the "S.D." (Swordian Dymlos). This item was obtained in Tales of Phantasia PS1 in the Colosseum area. In the end, there'd be a cameo of Stahn Aileron's sister from Tales of Destiny, Lilith Aileron, that you'd fight. Once successful, you'd obtain this item and when equipped you could use "Fatal Fury". However, this event doesn't exist in the GBA version, Lilith's data is non-existent, Fatal Fury is not an arte in this version and there's no battle graphics as well which leaves this item fully unused and not functional in battle. Although, the attack power and elemental attribute are correct.