The Elder Scrolls Travels: Oblivion is a PSP spinoff of Oblivion which takes place in the province of High Rock during the Oblivion crisis. The game was cancelled for unknown reasons in mid-2007, with five builds (ranging from June 9, 2006 to April 27, 2007) leaked online.

This page documents the April 27, 2007 build, which consists of two demo areas: the Combat Demo and the Quest Demo. 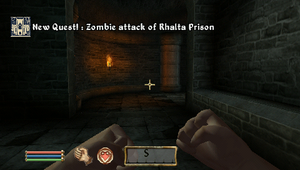 Choosing the Combat Demo spawns you in a prison, armed with nothing but your Flare and Heal Minor Wounds spells, and gives you the Zombie attack of Rhalta Prison quest.

The prison is inhabited by many hungry zombies and sad skeletons, and contains a variety of weapons for you to try on them. Killing all the zombies and skeletons will complete the quest, and result in a prompt to quit the level. 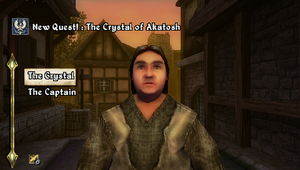 The gatekeeper welcomes you to the Quest Demo.

In the Quest demo, you enter the town of Anticlere, where the gatekeeper alerts you that The Temple of the Nine has been raided by the Mythic Dawn, and you are given the quest The Crystal of Akatosh. Anticlere's temple is guarded by Mythic Dawn and some Daedra.

There are several NPCs with several quests contained within Anticlere's two accessible zones, as well as a pretty comprehensive demonstration of the NPC dialogue and quest systems in play.

Leftover strings in the game's string database points to the game being based off Climax's previous PSP title Ghost Rider.

Some placeholder text seems very excited to be part of this game!

A set of credits are scattered through the game's "strings" files:

Many strings only used in earlier builds are also present here.