In The Elder Scrolls IV: Oblivion, Tom Cruise Uriel Septim VII is assassinated by the Mythic Dawn. Before his death, however, Uriel gives an Amulet of Kings to the player character, who is asked to stop the realm of Oblivion from taking over Tamriel. In the Knights of the Nine expansion, the Hero learns about the titular faction, that wants to obtain certain relics that can stop Umaril, a man who seeks revenge on the Nine Divines. In the Shivering Isles expansion, the Hero ends up in Sheogorath's realm in Oblivion, where he learns about the Daedric Prince's past.

In early dev builds, the arena armor was split into three parts.

It seems the blindfold was intended to be an item at some point. In the final game, it's a hairstyle used only by the Blind Moth Priests. It's actually also the "default" hairstyle for NPCs in the construction set that will be used when their hairstyle is set to NONE.

At some point, the Mythic Dawn Armor likely was meant to be usable. Interestingly, the helmet icon is missing the mask. This item can be obtained in one of the test levels. Normally, the game treats it as a bound item, but bound items have their own objects and IDs.

Like the Mythic Dawn Armor, this armor has its own unique icons for inventory menus, but aside from the shield (due to the fact that characters drop their shields to the ground as an item when they die), the armor cannot be picked up by the player due to it being marked as non-playable in the construction set. Even if you did manage to pick it up or add it to your inventory via the console, it would not appear in your inventory, and will not appear in the inventories or barter menus of any shopkeepers or lootable corpses wearing/carrying it, leaving the icons unused. The icons are correctly assigned to the items themselves, though, meaning that if you set them to be "playable" in the construction set, the icons will appear as expected.

The Dark Brotherhood has an Executioner rank that the player skips over - the questline promotes you straight from Assassin to Silencer. Nevertheless, it has a graphic for your Journal's factions page.

A vampire race, found only in the Construction Set, with red eyes and very pale skin. The Vampire race has no attributes, skills, or traits for either gender. Only two NPCs are Vampires in the standard game, although neither can be met in-game unless spawned by console commands – one is called Dead Meat (ID: TestDeadMeat), while the second has no name (ID: TestErikNpc). This race was probably meant to be playable, but was cut early in development.

There is a certain number of various notes and letters that can be found in different building and private houses, meant to extend the lore of the game. While some appear in lots of different places, some do not appear at all.

All these notes (but Sealed Note, Shop Hours and Tavern Hours) look like scrolls of varying size when thrown out of inventory.

A key that opens all locks is a master key. The problem is, it might not exist.

Unlike armor, this does not protect you. At all.

This list contains spells and magic effects that are listed in the Construction Set but are not available in-game. They can still be obtained via the console, but since these spells are not available for use for a reason, they may cause various issues like crashing to desktop due to undefined animation and particle files.

No concrete clues have been found in the Construction Set about these spells, nor is it known why they were cut.

Like the spells above, you can add these to yourself or any other target with the addspell console command followed by the associated Form ID. Diseases and Abilities are always active, while Powers must be cast, though they are immune to Silence. Greater Powers can be cast once a day, but Lesser Powers can be cast as many times as you want and may or may not cost magicka. Neither will increase any skills when cast.

In the final game, when having no armor or clothes equipped, male characters appear with a loincloth on while female characters have both a panty and bra on. Many games from this era had the underwear as part of the skin texture, however, this is not the case here, as the breasts are actually fully textured (albeit without nipples). The discovery of these textures, alongside some gore-related content, lead to Oblivion being re-rated by the ESRB. 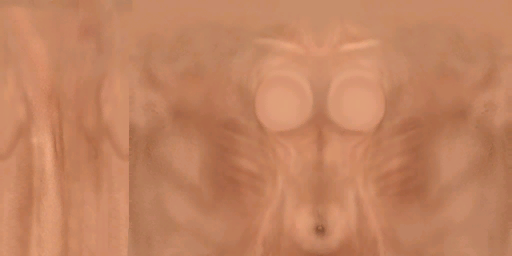 Under most conditions (Unless caused by the "reference bug" [2]), the player is unable to see what their name is before the start of the game. However the player does have a name, but the character creation screen takes precedence and the name field becomes blank. In the construction set, the player's name is "Bendu Olo", who was the old king of Anvil. The name can be seen in Oblivion's E3 demos, as well as some early Morrowind screenshots, hinting that it's a placeholder used by the devs.

In the final game, there is a single female Dremora in the Oblivion planes that the player can access. Strangely this Dremora is the only female one ever used in the final game, and she doesn't have any audio and thus doesn't make any noise when attacked or killed. If you use a high level charm spell to make her talk, she displays the default error trap message "I HAVE NO GREETING" instead.

In random Oblivion Plane 3 (the plane of Oblivion with a broken bridge leading up to five towers with the main tower in the center with two gates on either side leading to two other towers), off the map to the west, there is a long island in the lava. The island doesn't seem to have anything of interest except for a lone door, which doesn't lead anywhere when activated. What this door was for is unknown.

In random Oblivion Plane 6, there is a single Blood Potion placed neatly behind some tall rocks east of the entrance to the Blood Well. It weighs nothing and serves no purpose or function. It cannot be used by vampire for feeding purposes either. It is the only Blood Potion available in the entire game.

He Said, She Said

In Oblivion, there are quite a lot of characters in the game that get referred to as the wrong gender in dialogue. In the case of City-Swimmer, she even misgenders HERSELF in her own greeting, referring to herself as male. There is no in-game reasoning for these dialogue examples and it seems to either be that the developers made many mistakes regarding the character's genders, or changed a lot of the character's genders throughout development and forgot to re-record some of the dialogue referring to them. Affected NPCs include: Estelle Renoit, Salmo the Baker, Falanu Hlaalu, Mach-Na and Hal-Liurz (after seemingly noticing the errors in some dialogue about her, they removed all conversation dialogue about her from the game, even ones without referring to her gender).

There is an abandoned house called 'Nerastarel's House' located in Skingrad, within which resides all manner of undead. No NPC named Nerastarel exists anywhere in the game and they never get mentioned by anyone. The only time the house's existence gets acknowledged is when Amusei mentions it during the quest "Lost Histories". Despite being abandoned, entering the house is considered trespassing.

As with any good Bethesda game, there's going to be a lot of bugs that weren't squashed in the beta tests that made it to the final. And some that were introduced with future patches!