The Legend of Heroes: Trails of Cold Steel III (Windows) 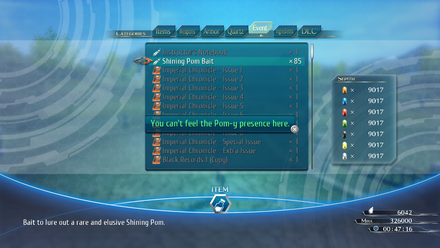 This version of Shining Pom Bait would have functioned like it did in the previous two games. It doesn't work anywhere as the enemies weren't fully coded in. 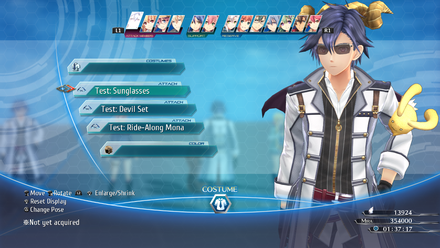 Test Sunglasses, Test Devil Set, and Test Ride-Along Mona are among the test equipable accessories in the game. 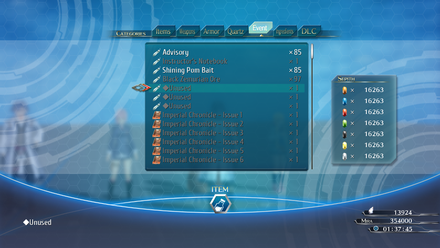 Three unused items that do nothing. 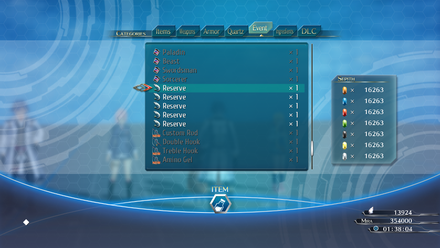 Five reserved fish items that can be tossed. 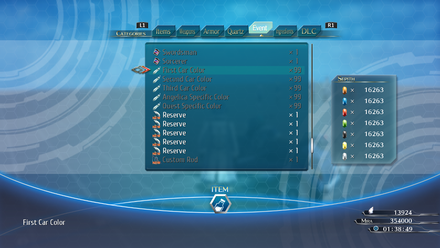 Five unused bike colors. Perhaps they were planning for a customizable bike color option like in the second game. 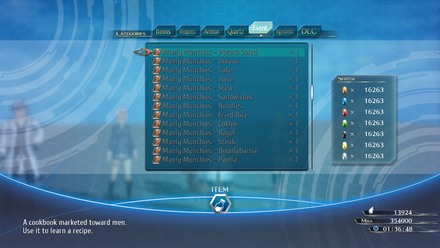 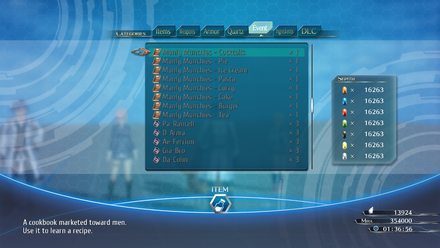 The entirety of Cold Steel 1's Manly Munchies remain in the game. None can be used. 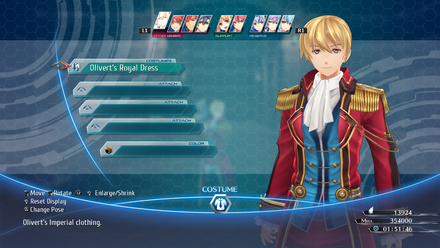 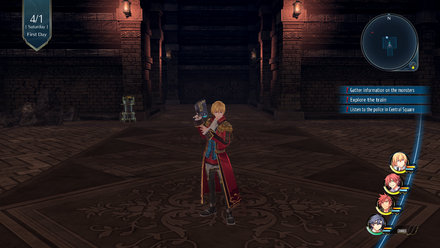 An unused costume for Olivert which is fully functional. To add this to your inventory, follow the steps listed below. You'll need a hex editor for this.

A list of unused status effects that can be inflicted by enemies or allies, however no item or enemy actually makes use of them. 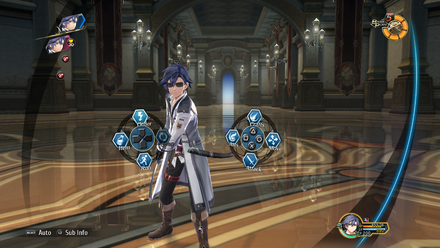 An unknown status effect with green and red arrows. It's a negative status effect that cannot be cured. It can be resisted, however. Makes a balance down SFX.

A single status effect that does all stat down to an enemy. Each status effect is generally placed individually on an attack, this one however is simply one value rather than multiple.

Different from All Cancel, this quietly removes all positive status ups on a character.

Completely hides the character model. Cannot be undone for the rest of the fight. Acts like stealth without the icon or effect of it.

Each attack has its own AT delay used by the attack, however this is a status effect itself that oddly directly affects the attack. Once the attack is done, the user can immediately attack again without moving their turn order.

Remove Player From AT Bar

Removes a character from the AT bar and cannot act as a result. They still will be on the field and be allowed to do follow up attacks, however.

Duvalie's Prism Calibur is among the possible attacks coded in her AI, however due to improper AI attack conditionals, she never uses it. This would have had a probability of activating if her CP was higher than or equal to 150. This doesn't happen as anything over 100 CP is ignored in the attack conditionals. It's possible this was an oversight.

In the Jessica VS Rean fight, there is a "7th Slash - Fallen Leaves" that is a part of his attack table, however the used version of this externally makes a call to t_magic.tbl. The unused version has no attack table entry and has a art cast animation linked to it. It ultimately does nothing when forced to display.

Arianrhod would do Holy Grand Cross an infinite number of times if her CP remained at 200, however this battle condition does not read anything past 100 CP. The used version of S crafts are linked to an "is Enhanced" conditional and would be the first craft used when in the Enhanced state.

In the second fight against him, there is a Diamond Nova art coded into the attack table of his AI, however there is no attack ID linked in the attack conditional table.

His Dark Howl would have activated an unlimited number of times at any time if he had 150 or more CP. Like the above enemies that use this attack conditional, this doesn't work as the limit to this conditional is 100 CP.

His Incandescent Hellfire would have activated an unlimited number of times at any time if he had 150 or more CP. Like the above enemies that use this attack conditional, this doesn't work as the limit to this conditional is 100 CP.

Attack conditional 0x6 checks if the enemy's EP is equal to a certain amount before doing the attack linked with this. However, no enemies in the game make use of this. Enemies disregard EP amounts as they can have zero EP but still cast. 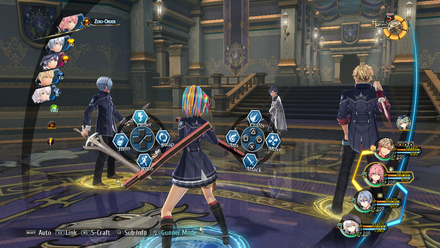 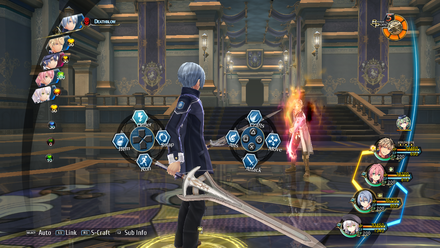 A battle setting that enables both regular elements and high elemental attributes almost every turn.

BGM table entries which relate to music files no longer in the game. Most of this seems to be a copy and pasted table entry from the first Cold Steel game. The order is as follows: internal hex ID > filename > song referenced.

An unused Pom mini-game appears in the game's help text, however there is no longer any code in the game to actually play it. This likely would have been based off of the Pom game in Ao no Kiseki. 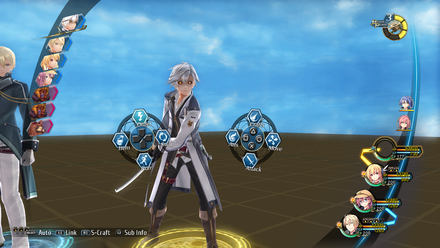 While not fully unused itself, Rean's second ogre form can enter regular battle, though will crash the game when entering a scripted fight. It has the same properties as Spirit Unification. Also contains an unused battle icon.