From The Cutting Room Floor
Jump to navigation Jump to search
Translate this page
Other languages:
English • ‎español

Yume Nikki ("Dream Diary") is the story of a young girl named Madotsuki who has very strange dreams. The game is a wide-open world, with no main goal besides collecting all the Effects.

The game launched under v0.00, being updated numerous times until v0.10 was released as the final content update on October 1, 2007. This page covers v0.10(a), while the prototype article details the earlier versions that have been recovered.

Note: Due to many characters and locations lacking proper names, this article primarily uses the commonly-accepted fan names provided by the Yume Nikki Wiki for the sake of familiarity, unless referring to specific files.

In the Steam and English Playism versions, all the default graphics, sounds, and music assets from RPG Maker 2003 remain in the game's files, unused.

There are some sprites for more Effects in the game, as well as additional sprites for some existing Effects.

This unused Effect has Madotsuki wear a blindfold. The 8-bit wake-up pinch sprites were overwritten by the Spirit Headband effect with invisibility active, but can be found in v0.09.

A mugshot exists for when Madotsuki is riding the desk chair, but even with the various chair-related glitches, it can never be seen. Perhaps at one point, being able to open the menu while seated in the chair was intentional, and not a bug.

Also unused are some moving sprites for when Madotsuki is sitting still in the chair, which may have been the original animation for scooting around in it. Only the first frame of each direction is used in this state, though each of the unused frames are duplicates that are shifted over.

Crick in the Neck

This isn't really an Effect; it's a random condition that may happen when you get out of your bed. All you're able to do when you have it is sit down and go back to bed. If you go back to bed, when you wake up again you're back to normal. But...

There are 8-bit sprites for it! This indicates it may have been intended to be an Effect at some point.

In the mini-Hell accessible from the Number World, there's a ghost of you that's always facing you and never moves. It looks the same as you, but grey and transparent. Just an NPC, right?

Nope, this mugshot indicates there was supposed to be a Greyscale Effect at some point, or that you would become grey when in the White Desert. The fact there's no 8-bit version of this Effect supports that theory. Adding on to this, v0.09 has wake-up pinch sprites for Greyscale Madotsuki.

There are graphics for an unused state of the Traffic Light Effect with both lights off. FC World sprites also exist for this state.

This unused Effect met the same fate as the Blindfold effect. The mugshot for it is found in each of the currently available versions, but the actual sprites of it have only been found in v0.04 (although even then they aren't used). The triangle on it suggests it was what originally happened when using the Spirit Headband effect.

Duplicates of the Witch Effect sprites without shadows exist, but are never used. They were probably intended for flying over an area with no visible ground, or for the Witch's Flight event, which ended up using pictures instead. 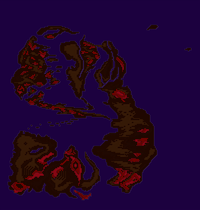 This unused right half of the map, dubbed FC World C by fans, is inaccessible by normal means. No events are programmed in this area, though Kikiyama did have something in mind for this area at one point. 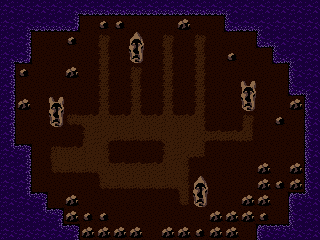 Map0153 is an unused FC World map with a hand motif on the ground and a few statues. No events are programmed in this map, so you cannot exit. It resembles the initial locations in FC World A and B that you are teleported to from the Teleport Maze and the Barracks Settlement, respectively. An unused event in v0.09 sends you here, and the exit leads to the northernmost point of FC World C. 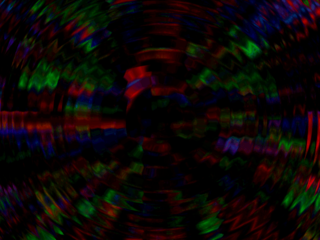 The only unused background in the game, internally known as ネオン背景.xyz ("Neon Background"). Curiously, with the debug party member (see below) equipped, this background appears in Neon World, although it is not symmetrical and therefore does not look as intended.

A message window that allows three lines of text. There is never an opportunity to use this window in v0.10, but it might have been used in v0.05, the first version to add borders for messages.

A plop sound can be found in the Sound folder under the name ピコッ.WAV. This is a leftover from v0.04, where it was used when you received juice from the vending machines.

This sound plays if you no-clip to interact with the creature that rarely appears in the pond on the Witch's Island. It is used for when you stab the big Goblin,[1], and sped-up when interacting with an NPC in the Neon World,[2] although it is missing from some English versions.[3]

Cached within the Thumbs.db files are a few earlier versions of existing images, as well as some that were cut from the final game. Unfortunately, due to the nature of compression within Thumbs.db files, the quality and resolution of these files are very low. 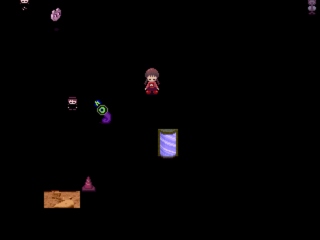 The Debug Room is accessible through two methods: rename the file Map0001.lmu to the name of another map, such as Map0003.lmu (Madotsuki's room in the real world), or set an event that goes to the debug room in RPG Maker 2003.

The various objects in the room all do different things: 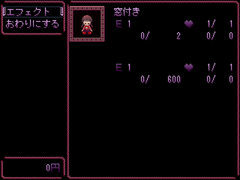 Another party member can be added to your party, but this never happens in-game. It's nameless and there are no sprites associated with it, but having it in your party causes several scripts in the game to change: 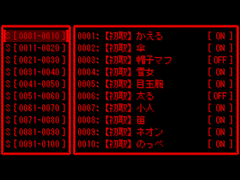 When running the game through RPG Maker 2003, various debugging tools are usable during gameplay. These can also be enabled by creating a shortcut to RPG_RT.exe in the game's folder, and appending "TestPlay" (with quotes) to the end of the command.

Some maps have events that are not set to be triggered by regular means, nor by the debug party member.

The following three events are remnants from v0.09, which had a more inefficient method for playing the floating sound while riding the broom with the Witch Effect. While v0.10 has common events to take care of this, v0.09 had the entire script for enabling the floating sound on nearly every map. Both versions still ultimately accomplish the same thing by swapping out the current tileset to an identical-looking one that plays the floating sound on every tile.

Due to a significant amount of refactoring that occurred between v0.09 and v0.10's development, these events do not function as intended anymore, as all switches and tilesets are assigned to different indexes. The three events below were never updated to accommodate v0.10's method of calling common events.

In the second Neon Tile Path map (Map0038.lmu), an event in the upper left corner of the map titled 【箒ﾁｯﾌﾟ替】小１ ([Broom Chip Substitute] Minor 1) can be activated by turning on switch 203. This switch is normally used for NASU, but in v0.09, it was used to check if the Witch effect was obtained.

This changes out the tileset used by the map to the one used by Footprint Path A, where the Henkei Shita NPCs are.

Switch 203 can also affect one of the rooms in Number World. In the room that leads to the Guillotine Room (Map0030.lmu), there is an event in the upper-left corner titled 【箒ﾁｯﾌﾟ替】電燈 ([Broom Chip Substitute] Lamp) that will change the tileset to Forest World's. 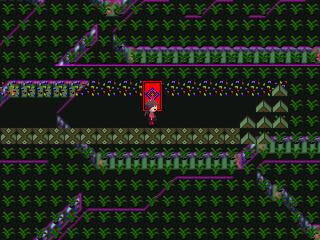 Sitting down with this switch on briefly changes the tileset back to Number World's.

Switch 203 can be used to trigger an event in the Pink Sea (Map0108.lmu) named 【箒ﾁｯﾌﾟ替】浅瀬 ([Broom Chip Substitute] Shoal), however, unlike the former two, all it does is turn the whole map black because the tilesets that get called are blank ones that are just used as dividers in the database. 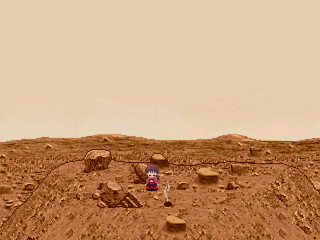 This unused event is only found in the unpatched v0.10, and was removed in the Yumesyuusei patch and v0.10a.

A mock-up image of how the stairs might have been used has been provided. The tile containing the event is directly to the left of Madotsuki. Note: the map's collision normally blocks access to this tile, suggesting that it may have had a different layout at some point.

Years after v0.10's release, publishing rights to Yume Nikki were acquired by AGM Playism, providing new distribution platforms for the game. The versions distributed by Playism have minor differences from the original v0.10.

An optional patch on Kikiyama's site titled Yumesyuusei is available to update v0.10 to fix some bugs present in the initial release. This patch was quickly released after v0.10 on October 6, 2007.

The changelog, while speaking in mostly general terms, states that the following issues were fixed:

See the Bugs page for explanations on these issues.

All future releases of Yume Nikki would be based on v0.10 with this patch applied, including the fan translations and distributions from Playism. Kikiyama did build a version titled "0.10a" that has the Yumesyuusei patch pre-applied, but the download link on their website was never replaced to host v0.10a, leaving its distribution to Playism.

Yume Nikki was added to the Playism distribution platform in Japan on February 10, 2012, followed by an official English localization releasing worldwide on July 11, 2012.

These versions are based on v0.10a, which is v0.10 pre-applied with Kikiyama's Yumesyuusei patch available on their homepage. Manually applying this patch to the original v0.10 does not add "0.10a" to the title screen, though the changelogs included with the Playism releases reveal that Kikiyama built a version that shows "0.10a" on the title screen on October 6, 2007, the same day as Yumesyuusei's release.

Playism's English localization notably mistranslated some of the Effect names, rendering the Severed Head Effect as "Talking Head" and the Demon/Oni Effect as "Devil". It also left the messages for riding the chair and changing the menu scheme untranslated.

Yume Nikki debuted on Steam on January 10, 2018, in an effort to help promote the then-upcoming reboot YUMENIKKI -DREAM DIARY-. It is offered in both Japanese and English, with the former being identical to the previous Playism release.

The initial English version featured on Steam contained mostly the same localization as the Playism release, but suffered from numerous bugs that resulted from renaming the game's files to allow Yume Nikki to function properly without a Japanese system locale. These bugs primarily consisted of crashes from not being able to find a specific file, sounds not playing, sounds not playing at the correct tempo or volume, and tilesets appearing when viewing the menu in FC World with certain Effects equipped. Despite all this, they at least got around to translating the two aforementioned messages they left untranslated last time.

Oddly, the initial release had a second copy of the game contained inside a folder titled DreamDialy: a seemingly in-progress transition from the previous Playism version. It was built with an older iteration of RPG Maker 2003 that lacks the new features offered by the version on Steam, such as options for window scaling. It is overall similar to the initial Steam version, but with a major bug: Most of the music does not play due to the filename changes not being reflected into the maps.

Several patches have been pushed out since the initial release that resolve some (but not all) of the bugs that arose during localization:

Erroneously-named Effects were corrected to their proper names, and some Effect descriptions were redone: