Five Nights at Freddy's 3 is the third game in the series. Set thirty years after the first game, a horror-themed amusement park based on the old pizzeria is set to open, using actual props, pieces, and one of the animatronics! What could possibly go wrong?

(Here's a hint; everything.)

The Lives text and stickman are in the third game's files, and are as unused as ever.

A button that says "Seal Vent". Possibly going to be used to seal a vent, but in the final game, you have to double click the vent camera to seal a vent.

The version number from the second game is present.

Graphics exist for a seventh, custom night, even though there are only six accessible in-game. 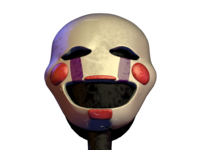 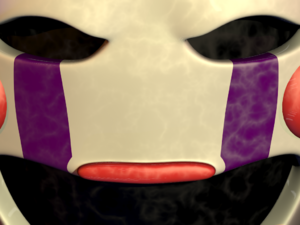 The animation of Springtrap walking in front of the office is cut off halfway, hiding his (stationary) legs.

Just like Springtrap's walking animation, his standing-behind-window-pose is not seen in full. 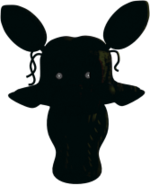 Only the top half of Phantom Mangle's head can be seen normally, leaving the rest of the head hidden from view.

The v1.03 patch, released on March 23, 2015, adds a fourth star to the menu when Aggressive Nightmare mode is beaten.

The v1.031 patches, which were released on April 1 and April 2, 2015, change several things related to sound effects.