Freddy Fazbear's Pizzeria Simulator is another freeware spin-off released in which you design your very own pizzeria with Freddy! Design your pizza, throw it to the kids and... Wait, why is the game glitching up? It froze? ...Is that Circus Baby?!

In a surprise turn of events and through a very well-played prank, this game is the anticipated Five Nights at Freddy's 6. Be afraid. Very afraid! 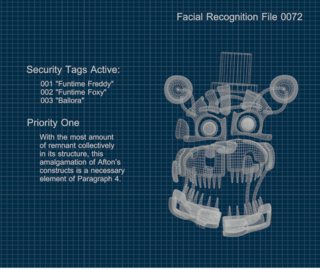 There is a blueprint of Molten Freddy only found in the game files. It belongs supposedly to the rest of the blue prints found in the Insanity Ending. Despite being unused, the description for this blueprint is considered canon to the lore.

There are various buttons, likely intended for use with Cassette Man's tape recorder. Due to the tape recorder having actual buttons to interact, all four buttons went completely unused.

Due to issues with the game engine, the jumpscares are choppy, however full animations lie within the games files.

Fixes a bug where one of the frames doesn't appear in the Good Ending.