FNAF World is a cute RPG spinoff of the original horror series. This time instead of fending off killer Animatronics, you play as them in a bright and colorful world! (Though they are still very murderous and should not be trusted! Or, perhaps there's something out there that is pulling the strings...)

The game used to be available for purchase on Steam like the other entries, but it was later re-released as freeware on GameJolt after the creator stated he released it too early and wasn't satisfied with the reception it got despite the positive ratings. Regardless of the issues at launch and the strange shift in tone, it's still a very fun game in its own right.

Like with the other games, there are unused graphics that are only seen in the demo. It's a little strange that the demo of the game is still available despite the full game being released as freeware after the disastrous Steam launch.

This graphic was present in older versions of FNaF World, but since Update 2 introduced more characters and took up the entire screen, it was taken out.

This text is a reference to one of the hidden minigames in FNaF 3. It was seen out of frame in the "Drowning" ending.

An unused version of Brow Boy can be found in the game's files. Apparently, Brow Boy was originally going to be a regular enemy, just like Ball Boy.

Three strange looking stars that has been present ever since the original game, though these do look the same. Each of them become visible upon getting the 3 endings, Normal mode, Hard mode and the Chipper's Revenge ending, but they are offscreen, thus never have been seen. 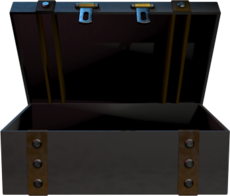 A strange opened box from Five Nights at Freddy's 4 is seen out of frame in the subtunnel sections. There's no actual coding for the object, so it may have been thrown in as an Easter Egg for decompilers. Scott stated the box contains "the pieces put together" and it was supposed to be opened in the Halloween Update, but no one figured out the story to the fourth game before that happened, so he put that "some things are best left forgotten, forever".

A turtle that was recycled from Slumberfish, another game by Scott Cawthon. It was meant to be used in the fishing minigame, but it never appeared.

An alternate version of the Cupcakes in the game. The one used in the game is bigger, has different lighting, and it moves to the left and right, rather than up and down. This animation is grouped with the Cupcake object in the game, and it is programmed to stop the animation after it bobs down once.

An unused attack called Toxic Song that has no coding for it is also in the game's files.

These are meant to be played when your foes get inflicted with the poison status, but was never used, probably because in the final game the enemies are individually poisoned, and are not all affected at once unlike all the other stat decreasers.

The "remnant"s of an unused chip called Haunting (An attack in the game that freezes one enemy) is also present in the game's files. This chip cannot be hacked into the game, as it was never coded in to begin with, only the graphic for when you find it exists.

This victory theme plays for about 40 seconds after winning a fight, but it normally plays for about ten seconds before the game boots you back to the overworld. The longest that you can hear the track play is when you beat Security on Hard Mode which had the most experience and payout, but you still don’t hear the last half of it unless you utilize a glitch. If you manage to run at the same time as winning a fight, you can hear the full song until the music changes.

In Update 2, the game introduces voice acting. This quote said by JJ (in which she swears!) in Foxy Fighters was never used in the game. This could have played after Nightmare Chica’s plane gets shot down, but only Toy Chica responds to it in the final.

In all the endings, this text is hidden in the code. This could explain the cold, unfulfilling and somewhat strange endings in the game.

In all the endings, this bold text is present offscreen. This suggests that the game would once reveal which ending is which.

This dialogue is the last thing Fredbear says in the first time he tells the player to find the clock, however due to an error in the programming, the game instead automatically brings the player to the loading screen when it appears since it is the last string of text instead of adding an additional null string, making it unseen altogether.

This graphic is seen when you get a game over and it flickers rapidly, but it's very subtle and easy to miss. Upon closer inspection in the animation, there's a texture of a partly obscured sillouette of the text. This is what that texture looks like.

In the "Character Select" menu, there appears to be a file of how much strength a character has, and it is seen in the MFA. It is never shown to be used in game however. There is programming left over of the expression used to calculate the strength of a character:

In the 'Drowned' ending, the text 'Happiest Day' can be seen off-screen above the graphics.

Adds a warning for flashing and disorienting effects when the game starts up, as well as attack descriptions during battle.

Adds a map feature accessible by holding down the TAB key. Even with Update 1 revamping the graphics, the map retained the original 8-bit look from the early versions.

Replaces the 8-bit overworld with 3D graphics (excluding the Glitch Worlds and Clock minigames). The party creation screen is redone so you can see the characters' stats by hovering over them. In addition, the customization is tweaked so you can rearrange your party by just selecting the desired character, instead of clicking the marker on the left side of the screen and selecting any character. The update also introduces a strange character dubbed "Desk Man". After this update, the game became freeware, as Scott admitted he rushed it (hence the slew of really quick updates) and offered refunds to everyone who bought the original on Steam as an apology.

Adds post-game content that can be unlocked by entering one of the houses in Fazbear Hills after beating the game just once regardless of which ending. It adds two new areas, some minigames, voice acting, and new characters. It introduced some minor changes and fixes, such as Nightmare Fredbear having Freddles as its attack instead of Bad Pizza, RXQFSFASXC's name is corrected in the party creation screen, added the ability to be able to walk diagonally on the overworld and oddly increases the time for DeeDee to reappear after catching something in the fishing minigame. Later revisions fixed the ability to unlock Animdude and Mr. Chipper through their respective boss fights instead of unlocking them through the new minigames, fixed a glitch for the Fan disappearing despite getting all 40 characters in the original and removed the curse word from the final boss of the update after defeating it (which was recycled from the Chica's Magic Rainbow minigame). Desk Man's dialogue is now completely changed and adds a new ending.