The direct sequel to Super Metroid, in which Samus has ninja reflexes and emotions. Also, friends.

All the assets in the game are merely labeled with numbers, starting at 0 and going up well over 4000. Since the filenames aren't very useful for searching, assets are organized into groups, starting with character models. However, most of the models near the beginning of the list are actually earlier versions of props used in some of the game's earliest scenarios.

Two models were left in the game that were used to render some of the official artwork for the game. Both models have most of their rigging removed and have a scene animation to set up the camera. They lack any sort of collision models, unlike the rest of the models in the game. 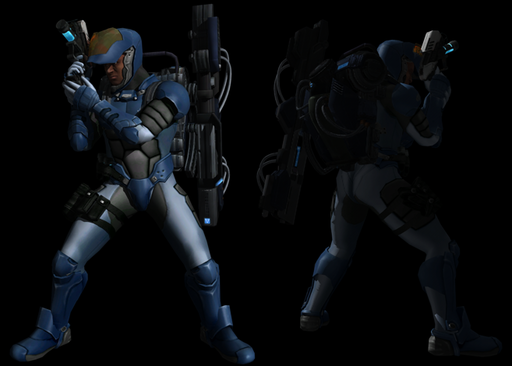 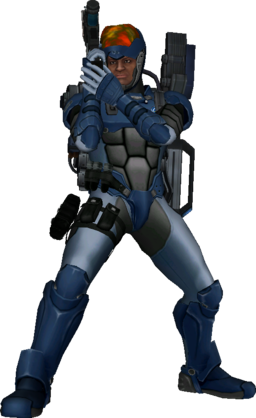 Model 5 is a high-poly, pre-posed model of Anthony Higgs with a whopping 28,388 polygons. It was used for this image. As a bit of trivia, the name tag on his shoulder belongs to James Pierce, as it is the only high-resolution name tag texture used in the game. 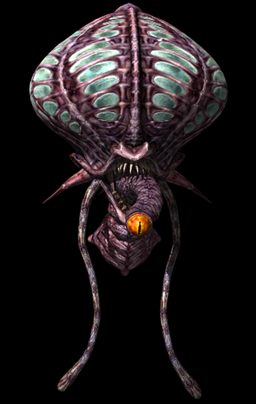 Model 9 is a pre-posed model of Phantoon, made from the in-game model. However, the particular art this model produced was never released, because Phantoon's design was subsequently changed. The eyestalk was changed from a thick tube with half of the eye exposed to a thinner tentacle with a claw-like structure holding the eye. The eye texture used on this model has more detail around the middle than the final model, though the same normal map created for this version is used for the final model.

One of the many animation files for Anthony is a rigging test, which transitions between a standing and squatting position, testing the major bones. Unlike every other animation in the game, it has no semblance of natural movement.

A whopping 26 test rooms can be found before the regular level data. Most of them are designed to test a specific aspect of gameplay.

A number of cubes were used for testing actions in the game. Excluding the last one, they are all textureless, white cubes. They are all located before the map objects.

The main executable references a face graphic for Ian Malkovich in the characters menu. This is never used because his model is only used in one of the pre-rendered cutscenes and is not present in the game.

A very large amount of unused text, mostly related to the game's storyline, is present on the disc under a file called message_all.dat. Some of it hints at scrapped dialogue:

This dialogue (0x22176) is supposed to be used by Adam when Samus is redirected to the "observation room" after restoring power to the Bottle Ship, but never used.

These lines (starting from 0x22903) are intended for Adam and the 07th Platoon marines when battling with the Burg Mass. Some of these features one of the marines uttering "Damn it...!"

Probably intended for the Biosphere Test Area, when Maurice is finishing his "analysis" while Samus is questioning why Adam sends them there; but never used. Interestingly, the line "Any objections, Adam?" was spoken by Samus in the final version before she activates her Space Jump and Screw Attack. (0x22C76)

This (0x23292) would fit Adam when he and Samus lost contact with Anthony, but he doesn't use this line.

In this text (0x232C6), Adam was intended to send Samus and the platoon to the Geothermal Power Plant, but he did not say this line.

This text (0x26A2A) suggests that Adam orders Samus to "join the troop" (or the "other troop"?), referring to the 07th Platoon, when they were attacked by an unknown creature. Adam never does this in the game.

This unused text (0x26AAB) states that Samus is attacked by an unknown monster while in pursuit of an unknown person...?

These lines (0x26C66) are intended for after Samus and the marines found Lyle's body, but they are not used.

This line (0x2187A) was said by the Head Quarantine Officer during a training session, since "wall jump" refers to "Kick Climb". In any case, it's unused.

These lines (0x226BA and 0x22758) are intended for Navigation Booth stating that restoring the player's health and missile is not possible when powered down or offline. None of them are actually used, though.

Two lines (starting from 0x222FA) intended for the public address announcer of the Bottle Ship when going to the Biosphere, but it doesn't say any of these.

Another two lines (0x225FF) intended for the P.A. announcer when going to the Pyrosphere. Again, those lines are not used.

The options are slightly different between regional versions. The Japanese version has options for the language (Japanese or English), voices (Japanese or English), and subtitles (on or off), which default to "English", "Japanese", and "on", respectively. The American version, on the other hand, removes the Japanese voice option (likely due to overseas licensing issues with Japanese voice actors), keeps the Japanese language option and has the language default to "English" and the subtitles to "off". The European version has the same defaults and lack of dual audio, but Spanish, French, German and Italian are added as language options.