Metroid Prime Hunters is a Quake-styled Metroid game featuring a rainbow collection of new characters and the same two bosses over and over.

Doors can be set to require any beam weapon to open, and will use a corresponding color palette: Any (white), Volt Driver (yellow), Missile (orange), Judicator (purple), Magmaul (red-orange), Shock Coil (green-blue), Imperialist (red), or Battlehammer (green). In practice, regular doors never require the Shock Coil or Battlehammer, while thin doors only use the Any and Battlehammer variants. This leaves a number of door color palettes unused.

Present in the SDAT file.

An unused menu theme based on the menu theme from the First Hunt demo.

GameMessages.bin contains unused messages that do not appear at any point in the game, some of which hint at abandoned story elements.

The text above is most likely referring to the Delano 7, Sylux's ship. 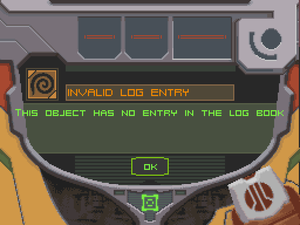 The improperly formatted message "This object has no entry in the log book" will appear when the Scan Visor analyzes an entity without a valid scan ID. This is not normally visible during gameplay because objects without valid IDs cannot be scanned.

Within BGMSELECTLIST.DAT is a list of track titles for the game's sound test in the Options menu. These titles, however, aren't shown in-game whatsoever.

In the following six videos, player spawns and a handful of other entities (such as jump pads) have been edited in order to make the rooms playable.

The game's binary contains two room definitions for alternate versions of a test level called Level TestLevel and Level AbeTest. The entity and nodedata files referenced by the definitions are present on the cartridge, but other files are missing. If the model, texture, and collision files from the First Hunt test level are ported over, the level can be loaded and the new objects clearly fit the layout of the original First Hunt room.

The model used by the enemy Trocra is named PowerBomb_Model.bin. There are no Power Bombs in the game, but this indicates they were present at one point in development and had their model repurposed as an enemy.