From The Cutting Room Floor
< Proto:Quake (PC)
Jump to navigation Jump to search

Beta3 is a leaked prototype of Quake that was made about two weeks before the game was released. Things are quite similar to the final, but there are a few differences here and there. It appears to be in a state between the shareware and retail versions, as the "Buy now!" messages appear when you approach the entrances to Episodes 2-4, but the episodes are fully playable. 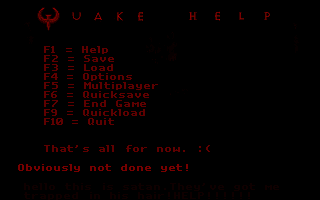 Most of the levels are the same as the final's, but there are a few differences.

The start map that lets you choose your difficulty and episode is named "Welcome to Quake!" instead of "Introduction".

More interestingly, you can find the "Well of Wishes" Easter egg that contains the Dopefish here! The Well is located in the water under the bridge that leads to Normal difficulty, and is accessible by taking the path to the hidden Nightmare mode teleporter and shooting the wall panel in the corner just before you enter the teleporter, then quickly hurrying back to a newly lowered lift on the left side of the bridge. This explains why the panel references the Well of Wishes in the final version despite it being in the Crypt of Decay.

The bridge over the first slime pit is activated by a timed switch, instead of a permanent one. Another switch is placed on the other side of the bridge for backtracking.

The altered crates in E1M1.

The crates at the end of the map are differently textured.

E1M2: Castle of the Damned

The altered crates in E1M2.

E1M7: The House of Chthon

The switches that activate the electricity pillars are located on the beams instead of being on side areas, while the switch that starts the electrocution has a red logo on it and is up higher than the final version.

The hilariously over-the-top monster telefrag fest that happens after you exit the level does not happen in Beta3.

E2M3: The Crypt of Decay

There is no Well of Wishes and there is nothing in its place.

This map begins with a tough gauntlet out of a water filled canyon before reaching the final start point. John Romero had to cut this starting area to keep the map under the 1.4Mb file size limit that had been set for BSPs. He later released this section as E2M10: The Lost Entrance of the Dismal Oubliette.

The Haunted Halls are in the E3M4 slot instead of E3M7. Satan's Dark Delight is in E3M5 and The Wind Tunnels are the secret level.

E3M6: The Chambers of Torment

The last area is a bit different compared to the final version; there is a pillar to the left and right of the teleporter, and a Shambler spawns behind the Vores as soon as the Vores appear, while in the final two Fiends appear when the player gets to the center of the bridge. Its likely that the Shambler was removed because it has a nasty tendency to get into fights with the Vores because it is right behind them, which makes the final section much easier than it should be.

"The" was dropped from this map's name in the final, since it is too long and draws over both the secret count and edge of the screen.

The Wind Tunnels serve as episode 3's secret map instead of E3M5.

Despite sharing the same name, this level is completely different than the one used in the final game. You start off in a square room that contains five Megahealths and has a round glass "window" across from the slipgate. Walking into the window will teleport you into a dark corridor that has two Fiends in it, along with a Double-barrelled Shotgun, Nailgun, and two shell boxes. On the left side, at the middle of the hall, is another teleporter window, which sends you to the final area. You can backtrack through either teleporter if desired.

The final area is a pentagon-shaped arena where the upper walls and ceiling are textured with water. There are two raised elevators to the left and right of the area you teleport in at and a triangular ramp directly in front of it. There are also five floating platforms above the arena. The ramp leads to a Grenade Launcher, and you can jump to a raised area with a pentagram made out of lava, which has a Thunderbolt in the middle of it. At the top of the ramp, you can see Shub-Niggurath – you're likely intended to see her all the time, but she gets culled at certain places/heights in the arena. There's a Pentagram of Protection on a platform across from the Thunderbolt, and two Shamblers, a Rocket Launcher, and a Super Nailgun on the path under it. The two elevators can be lowered by damaging a red stained glass circle under the triangular ramp, which will open a small secret containing ammo and a switch to lower both elevators. One elevator leads to a platform with red armor, the other to an identical platform with a Quad Damage powerup.

Touching the Thunderbolt will cause three Fiends to spawn into the arena, along with five Ogres on the floating platforms, and two Vores on the elevators. While the other monsters are inconsequential, killing each Vore will cause a sequence message to appear. Once they are both killed, a teleporter will open underneath the platform with the Pentagram of Protection. It will eject the player on top of Shub-Niggurath, but she has no collision detection and you'll simply clip through her, taking a bit of falling damage in the process. There is a small, invisible collision box at the center of Shub-Niggurath that will bleed when attacked, but after a few hits, it will stop bleeding and Shub-Niggurath will stop moving. Nothing else can be done, making it impossible to complete the level.

Note that you can also get into the area with Shub-Niggurath through a simple oversight: jump off either platform that the elevators lead to, land on the small ledge between the upper and lower walls, and walk along them until you can jump into her pit.

None of the multiplayer levels included with the retail version exist in Beta3.

The Doubled-barrelled Shotgun, Thunderbolt, and runes at the end of each episode are called by their internal names. The Quad Damage powerup is called the Quake Power. Uninterestingly, all of the other weapon names also use all lowercase names in the beta – the nailgun is the only one that still does in the final game.

Rotfish, Shub-Niggurath, Vores, and Scrags all have different names in the beta. With the exception of Piranha, these are the monsters' internal class names.

Likewise, Spawns don't slime you in the beta – they tar you. Internally, their monster class is "tarbaby".

Each episode in the beta ends with the same basic text, although a separate string is already set up for the shareware version. The text displayed after all four Runes have been collected is not present in the beta.

The finale text is also unfinished at this point.

Retrieved from "https://tcrf.net/index.php?title=Proto:Quake_(PC)/Beta3&oldid=679707"
Categories:
Cleanup > To do
Games > Games by series > Quake series