The NES version of The Lion King is a quick and dirty port of the Game Boy version that manages to somehow be much worse for multiple reasons, most infamously by chopping out over half of the movie's story and ending before Simba becomes an adult.

It'd be easy to say that the game feels like a bootleg, but doing so would be an insult to an actual bootleg NES port.

There is a text resource at 0x3905, after the level names list. This message should be used at the Game Over screen when you choose "No" at the "CONTINUE" screen. It has the same format as the level names, but is not included in the corresponding pointers table:

According to display position, it has to be displayed at the bottom portion of the screen ($07,$1C) with the 8×8 font, but the level names are displayed using the 16×16 large font, and this particular message was converted to use a different displaying method rather than a text resource (CHR data with dedicated packed tilemap). So this text resource is completely unused.

Leftover graphics data for a removed debug stage. It's possible it was used to display collision and such during development. It should be mentioned that this graphics data is in NES CHR format, whereas the rest of the game's CHR data is stored in the ROM using the Game Boy graphics format (more evidence of the port being rushed), so every time the game needs to upload graphics into RAM it converts the data from Game Boy to NES format on the fly. There are no graphics data upload routines for the NES graphics format.

Interestingly, the same graphics are also in the Game Boy version in native Game Boy graphics format. There are a few differences between the two sets:

Pause the game and press B, A, Right, Down to skip to the next stage.

The button code from the Game Boy version (A, B, B, A, B, B) is present, but nonfunctional - entering the code while the game is paused unpauses the game and does nothing else.

Set the Skill level in the Options menu to Cub. Start a new game, complete The Pridelands, then collect one bonus bug in The Mane Event and complete the stage with exactly 2 lives left. Pause the Timon and Pumbaa's Bug Patrol game and press B, A, Right, Down. If done correctly, the game will automatically unpause. Exit the game, then lose all your lives in the Elephant Graveyard stage and select "No" on the Continue screen. Starting a new game from here will make you invulnerable.

The song "To Die For" is present as track 7 in the game's NSF, but is never played at any point. In the Game Boy version, this music is used in The Stampede stage; the NES version uses "This Land" for that level instead. The track appears to be somewhat unfinished in comparison to the Game Boy version, as the bass channel plays only a single note and is otherwise empty.

Given the NES port's unfinished and rushed nature, it's likely the developers simply didn't have time to finish "To Die For" and fell back on "This Land". 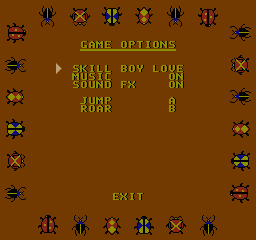 Enable the invincibility cheat, but don't start a new game. On the Options menu, select any option except "Exit", hold either Up or Left (or both), and press A. The Skill level setting will change to "Boy Love".

It should be noted that this string is cyphered (character ASCII code subtract 1), as opposed to other entries in the string list.