Originally released as a throwback to the first two games to quench our Duke thirst while we waited for Forever, Duke Nukem: Manhattan Project became arguably one of the last good Duke Nukem games.

The file duke/base/db_e01.zipfs contains various references to a "whore" enemy.

In scripts/monst/monsters.def, the following definition can be found:

None of the files referenced exist.

Attempting to spawn the whore, by editing the script file for another enemy, will crash the game.

An empty page entitled "Babe (formerly whore)" in the editor's help file implies that the whore is actually just an earlier version of the babes that Duke saves throughout the game.

In duke/base/db_e01.zipfs/scripts/player.sc, there is a flashlight defined for the player. However it is never used in the game.

Changing "start_on:false" to "start_on:true" will enable the flashlight, however you cannot turn it off.

I did not have sexual relations with that robot

There are two instances of this file, int_accept.ogg and int_nono.ogg.

The original "Let's rock!" from Duke3D. Found in the sounds/ui folder.

A dog being prepared by a chef and then cooked?

Get ready for big trouble in little China, Duke style! Morphix I'm right on your heels!

An alternate dialogue for the start of the Chinatown Chiller episode?

This thing's a trainwreck waiting to happen

Oh, how original, a cliched underground factory. If I wasn't so busy kicking ass, I'd hire a real writer, but I guess I'll look around

Not Darren, Diddly D, the master of his domain

Ed's dead baby, Ed's dead... but I can still hear his damn keyboard

Don't mess with me, Gary, or you're gonna get the horns

I hate to kick my own ass, but it's gotta be done

Fun fact: this quote was used for Duke Nukem Forever in its "The Doctor Who Cloned Me" DLC.

The filenames for these two files (subway-teetering-on-edge01/02.ogg) suggest that at some point, the train was going to be hanging off the edge of some broken tracks.

Something interesting to note is that the audio file for "Come on out Morphix, there's only two ways this can end, and in both of them, you die" is that the filename is comeoutproton.ogg. This is because Dr. Proton was originally planned to be this game's villain, but due to this clashing with the story of Duke Nukem Forever at this point he was swapped out for Morphix.

Appear to be unused versions of the theme song, presumably intended to be used in episode 8 (as they are located in the episode 8 files).

In db_e01.zipfs/ui/shd_mainm, there are files for two early versions of the main menu's "Manhattan Project" subtitle. It appears that the game was originally titled Duke Nukem: The Manhattan Project.

In db_e01.zipfs/ui/shd_hud, there is a file called old_x3000.png, which is an early HUD icon for the X3000 weapon. It appears that the X3000 was originally a reskin of the Assault Rifle, which explains why it reuses scripts and such from the Assault Rifle.

In db_e01.zipfs/models/e01/monst, there is a file called pigoid_armor.png, (note the png extension, as the final texture is a bmp), which is an early version of the pigoid SWAT armor texture. It is notable that the armor has "Proton SWAT" written on it rather than "SWAT". 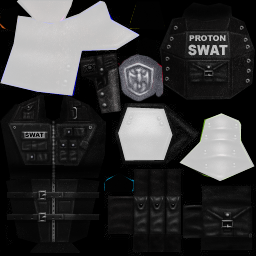 In db_e01.zipfs/models/e01/player, there is a texture named duke_shielded.bmp, which appears to be identical to Duke's regular texture, however his vest has been recoloured. This may imply that at some point in development, there were armor pickups which would be reflected on Duke's texture. 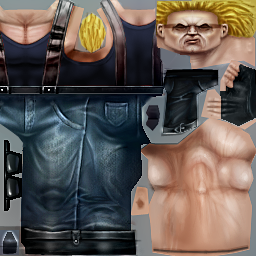 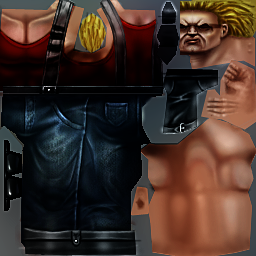 In the demo, duke/base/db_demo.zipfs/textures/2d contains an image called dduke.jpg. Note how the background is actually a scene from the 2001-era Duke Nukem Forever that can be seen in early screenshots. 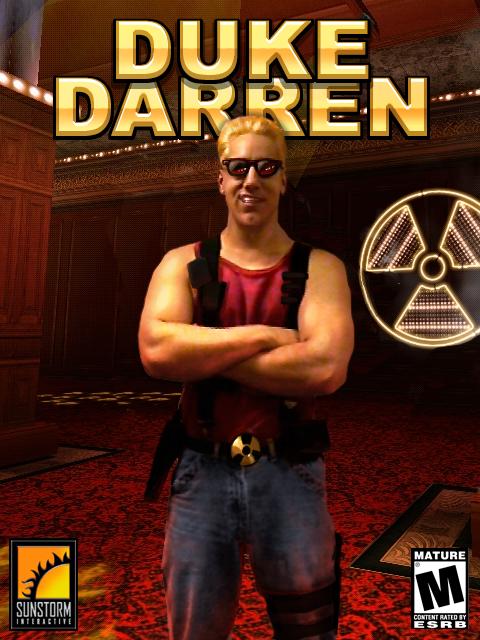