Duke Nukem 3D: 20th Anniversary World Tour is a re-release of Duke Nukem 3D. Instead of being a simple repackaging of the original game, it contains quite a bit of new content, such as an all-new episode containing eight levels (all of which are made by the original game's level designers), one new enemy, a new weapon, a whole lotta new textures, and a new final boss for the new episode. Gearbox also got Duke's voice actor back in to re-record all of Duke's lines and added a true 3D renderer to pretty up the old levels and make the new ones stand out more. All in all, an impressive celebration of the game's 20th anniversary.

Despite all of the bonuses compared to the original game, it didn't sell well, owing partially to how common the original game is. Even the new content couldn't sell enough people. Duke fans also weren't happy about it basically replacing Megaton Edition, a previous retail port to modern systems that was pulled off the shelves, that had the expansions packs World Tour lacked. Oh well.

All of the unused content from the original game is still in World Tour. One of them was changed for legal reasons. 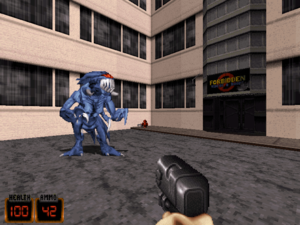 The mini Alien Queen, an unused enemy type was simply a smaller version of the existing Alien Queen boss, has been fixed to be like a proper mini version of a boss in World Tour, but is still unused in the game itself. She has far less health than she did in the original game and does not end the level when killed.

Unlike the fixed mini bosses, the game will still play the one liner that's used by Duke when she first activates.

Since the mini Overlord and Cycloid Emperor hidden in the original game's files were cleaned up and used in Alien World Order, it's possible the team wanted to use a mini version of the Alien Queen and got her working properly, but decided against using her later on.

World Tour uses modified versions of the RPG, Shrinker, Freezethrower, and the Pistol's reload animation so that they don't show any cut-off parts in widescreen. However, the original sprites for those weapons are still in the game's files and go unused.

The original HUD is still in the game's files, but is replaced with a more widescreen-friendly HUD that has the ends of the HUD stretched out more.

To comply with international law, the red crosses on the healing items were replaced with a pill icon. The design is very similar to the one used on the Doom Xbox Live Arcade and Doom 3: BFG Edition ports of Doom, which isn't surprising as Nerve Software handled both this and the Doom ports.

Nerve's scrubbing of the red cross even extended to tile 2454, an unused sprite.

Pink Strip on the Skycar

The skycar seen at the start of Hollywood Holocaust (E1L1) had a strip of pink on it (certainly not intended) that was removed in World Tour.

Several of the help graphics were altered to remove business names, such as credit card companies and other companies that had helped during the Atomic Edition's development.

Also, the graphic referring to 3DR's presence online back in 1996 was cleaned out entirely, only showing the Shrinker and Pig Cop that was on it.

None of these graphics appear in-game, but was likely done to protect Gearbox legally.

Note that the changed credit card company logos also affects the credit card logos seen in Raw Meat and Rabid Transit, as they both draw from that texture.

The Ten promo screen that appears when the original executable is shut down was hastily edited to remove any references to Ten.

The graphic itself does not appear when the game is shut down, however.

Something interesting to note is that the Firefly has an unused overhead sprite, like the Assault Trooper, Octabrain, and Battlelord do in the regular game's files. This suggests the Firefly's sprites came from a development period when enemies were meant to appear on the automap.

Of note is that a sprite similar to this one appeared on the back of the box of a Duke Nukem-themed "screensaver entertainment" program, suggesting a different take on the Firefly's design existed at some point.

Tile 5133 contains a test texture that cannot be seen in-game.

There are several unused quotes meant for Alien World Order.

Duke says "I'm the kinda guy that'll drink a gallon of gasoline so I can piss on your camp fire!".

Duke says "Motherdick!", a reference to The Walking Dead.

Duke says "If you were looking for the kingdom of the crystal skull, don't bother Jonesy!". The file name indicates it was meant to be played in Mirage Barrage.

Duke says "Rosebud". The "E5L7" in its name shows it was meant to be played in Hollywood Inferno, but there doesn't seem to be anywhere where Duke could say it.

This area contains two separate parts connected by two (fake) elevators. The part that has a "2" above its elevators has some Pipe Bombs, a box of Devastator ammo, a Large Medkit, and a chunk that can be blown up with an explosive weapon. Blowing up the chunk reveals nothing new, though.

The part with a "1" above its elevators is a simple box with nothing special in it. Interestingly, one of the elevator doors has been blown out, letting the player walk right into it without having to open the elevator doors first.

The ruined path on the upper right-hand corner of the floor containing the Battlelord in the center of it has an extra part that can only be accessed with noclip.

The only interesting thing about it is that it has a water pool that can be dived into, but it leads to a dead end.