This page details one or more prototype versions of Duke Nukem: Total Meltdown. 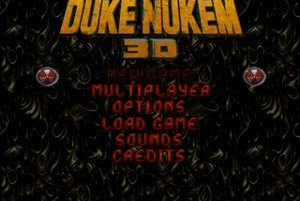 The title screen loads the DUKE256.TGA file in the CD. 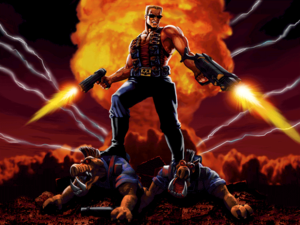 The posters in the theater lobby are the same as the PC version, i.e. the adult movies. In the final version, they were changed to PSX-exclusive ones.

Like in the PC version, it's an inaccessible multiplayer-only level.

In the PC version, "User Map" is a placeholder level that is replaced by a .map file loaded in the SETUP.EXE menu.

Named "Blank" in the final version. it's a placeholder level for E1L9.PMP which contains the menu assets. In the prototype it has some different textures.

Identical to the PC version. There are many glitches with the grass field, probably why the final version removed 256 pixels-long textures.

Mostly the same, except for some textures. Pig Cops are used instead of the Pig-in-Dress enemy.

The secret in abyss at the end has a Jetpack instead of a teleporter to return. It was likely cut because the player could cut most of the Trackside Tragedy level with a Jetpack.

A rendering of an enemy that never made it to the game.

The indoor area is similar to the final version, however the outdoor is very different.

The racing tracks have a different overall look due to the Wipeout-inspired textures not being included yet. Several extra walls were added in the final version for optimization purposes. In the prototype, the player can walk around the building where the yellow key card can be found.

Drones are used instead of Underwater Drones. The new Assault Trooper variant is already included (while the palettes doesn't work, it's easy to notice they take two shots with the shotgun to kill).

One major difference is that the racing tracks are filled with Recon cars, while the final version replaced them with Drones and Commanders. They are obviously meant to be replaced with an enemy that looks like a Pig Cop on a ship similar to the Feisar from Wipeout. The enemy didn't make it in the final version, probably because it would require changes in the source code to make it follow LOCATORS like the Recon car, while all new enemies rely on CON scripting. It's a shame, since they are more fit for the level.

Like in Nightmare Zone, a Jetpack can be found in this map. It was likely removed because the player could skip the Steroids jump at the end.

Named "Gates Motel" in the final version. Pig Cops are used instead of Zombie Pig Cops.

There's a switch in the labyrinth that will make a staircase appears, which lets you walk over the labyrinth. However falling in the secret with the Scuba Gear will get you stuck.

The room with the blue keycard cannot be entered, making it impossible to complete the map. In the final version, the doors are unlocked when the player uses the light switch where the yellow keycard is found. In this version the light switch only unlocks the door of its own room.

This perhaps suggests the level progression was meant to be different. In the final version, the area that can be entered using the yellow keycard is not needed to complete the level, meaning that a large portion of the level could be skipped entirely. Presumably the switch that unlocks the door to the room with the blue keycard would be found there. In fact there is even a switch without any tags in the area (in the room with blood dripping from the ceiling).

Another clue that a different switch was meant to unlock the door is that in the final version there are some unused Enforcer spawn places near the room with the blue keycard.

The café at the beginning has open windows, and the chairs are built with sectors instead of sprites. The bar that requires the yellow access cards also has windows that opens when you get inside of it (the windows still exist in the final version, but cannot be opened). By removing the windows, the final version drastically improved the framerate.

Pig Cops are used instead of the Magnum P.I.G. enemy. The boss is the Battlelord.

There are some Human characters in the level. They were given an alien appearance in the final version, probably because all male Humans are dead in the other episodes.

Surprisingly, the texture with the "Removed for legal reasons" is a PlayStation console. Apparently a PlayStation title is not allowed to show the image of PlayStation. Note that the final version includes an image of a DualShock gamepad in the controls menu, however the Sony and PlayStation logos were obscured.

Since the file E4L6.PMP doesn't exist, the map Void Zone (Blank) is loaded instead.

This is actually Alien Rendezvous in the final version.

The name appears to be making reference to "Royale with Cheese" like Duke Royale. It may have just been the old slot used for Duke Royale.

The secret exit is missing, since Faces of Death was not made into a single-player level yet.

Named "Quirk of Fate" in the final version.

First of the three user maps that can also be found in the infamous Total Meltdown level pack for the PC.

These maps are created by fans and were available on the Internet. They were probably illegally included in the game. Even if it's a prototype, some screenshots of these levels were published.

"Fort Kappa" (NEWFORT.MAP). The author is Mark Lythgoe, but his name is apparently mispelled.