Professor Layton and the Azran Legacy

Professor Layton and the Azran Legacy is a game that sets an example of why rushing to get your core series over with already really isn't a good idea. It's also the final Layton game centering around the professor's adventures in general, as the torch would later be passed on to his daughter Katrielle.


Warning! This page contains a couple of small spoilers.

Two different thumbnails for the characters Aurora and Romilda are in lt6_en.fa/menu/en/s_chr_ani_b.xa/001.xi. When clicking on their profiles in the game's bonuses, you can switch between the art/models of their two different outfits. It's possible there were supposed to be separate profiles for them in those styles.

This notion is further evidenced by the existence of s_chr_ani_c210.xa and s_chr_ani_c658.xa, which contain separate 2D profile illustrations for Aurora's casual clothes and Romilda's wedding dress respectively. When a character has two different illustrations they switch between, they're normally kept within the same graphic file, which is the case for the both of them (meaning the files with the separate sprites are overall unused).


In addition, there's also one of a human silhouette with a question mark over it in 002.xi, which is likely a placeholder. Professor Layton and the Miracle Mask has a similar graphic as well.

cesa_a.xi and cesa_b.xi are graphics for a translated version of the warning that shows up in Choubunmei A no Isan, telling the player not to illegally distribute the game over the internet. For some reason, the top screen is missing the 'D' in 'distributing'.

vlm_old.xa has exactly as described. Final graphic for comparison.

An image with "仮", or 'temporary', on it. This appears multiple times in files for Daily Puzzles that have less than 4 pictures included in their instructions. This graphic is also present in Professor Layton and the Miracle Mask.

Some text is stored in the same file as the title screen that reads, "trial version".

000.xi in trial_a.xa is the Japanese title with "乞うご期待！" or "Stay tuned!" under it, which would show when the trial's time limit was up. 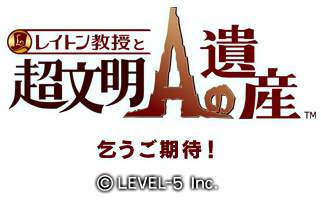 lt6_try.xi is a message shown at the beginning, warning that because the game is a shortened trial, some parts may be different. 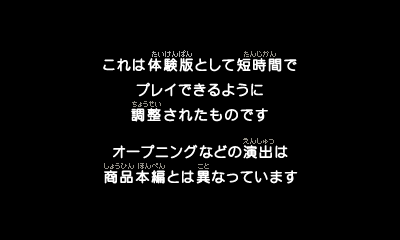 trial_thank_a.xi and trial_thank_b.xi are graphics for the top and bottom screens, which thank you for playing.

c901.xc in lt6_b.fa/chr is everyone's favorite 'Dummy-kun' character! ...As usual. Although now, he actually has eyes. 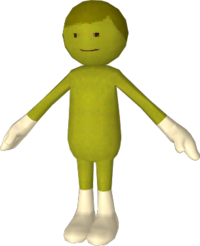 lt6_en.fa/nazo/chr/n084t_01.xc and n084t_02.xc are models of Macaw, Robin, and Plover from the version of 'A Troublesome Tent' included in the Tokyo Game Show 2012 demo. In the final game, they are replaced by two Puzzle Lads and a Puzzle Lass.

Unfortunately, he has no puzzle-judging models or animations to go along with these.

Within lt6_a.fa/res/naz/seq, there are .xq files (containing code) for puzzles numbered 169 - 175. There are only assets for puzzles up to 168 in the other two archives, meaning these are never used. It's not a major loss though, as the files are fairly empty and contain no code for things like animation(s), input(s), objects, etc.

In the Italian version of Azran Legacy- Il Professor Layton e l'eredità degli Aslant- the gender of Hazel the squirrel was changed from female to male. Her (his?) Italian name is Guscio, and Italian words and names generally end in -o or -i if they're masculine. Her character profile also uses 'vederlo', roughly meaning 'see him' (the feminine form is 'vederla', i.e. 'see her').

In the original Japanese version, Sage Sheppard's clothes are white instead of blue, to resemble traditional pope clothing. All overseas copies of the game change this, likely to avoid possible connections between the religious leader of Hoogland and any real-world equivalents.

As is the same with all Layton games, multiple of the characters have different names across regions.

The Japanese version has a little 'g' (for grams) by the weight counter. Other versions remove this...for some reason.

In the original Japanese version, puzzle #023 is about six apprentices working to cut fruit at a fruitcake shop. One boasts that because of their cutting, the fruitcake is full of 'S'. The task is to figure out which apprentice cutting what fruit made the claim. In the localized versions, the player has to give chocolates to characters in a specific order. This was actually adapted from a puzzle originally used for the region-locked Secret Nazotoki Room, which would have been given to the player when they entered a password from promotional chocolates.

Why the original was replaced is a mystery-- especially since it would have worked perfectly fine in most other languages.

as_s0000_cfg.xs and as_s0000_trigger.xs in lt6_b.fa/mini appear to be configuration and triggering scripts for the beginning minigame where you shoot down Targent's missiles and drones, and contain the date and time they were last modified, as well as the name of the developer who originally worked on them. Both have the same text.

as_m0000_cfg.xs and as_m0000_trigger.xs in lt6_en.fa/mini/en are for the same minigame, but have a different date/time and developer.

And in the Japanese version only, the as_m0000_cfg.xs and as_m0000_trigger.xs files have another date and person attributed to them.

lt6, according to archive and file names. This stands for Layton 6, denoting that it's the 6th game in the core Professor Layton saga.

In the "Voices" bonus, each character has up to five icons to show which spoken line(s) belongs to who, and a majority of them have different facial expressions to match what they're saying. In Bronev's case, they show him without sunglasses to signify that the line was spoken after he had taken them off in Chapter 5. In the graphic file, four of Bronev's icons depict him with sunglasses and one doesn't, as opposed to the three with and two without in-game. It's possible that there was originally going to be four lines either from before Chapter 5 or just before he takes the glasses off, and then one from after.