JumpStart ABC's is a game in the JumpStart series released in 1999. It is a game adaptation of JumpStart Preschool: Who Left the Juice in the Caboose?, a home video released that same year. 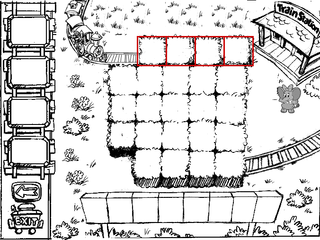 A sketch of the JumpStart Train Station minigame with the internal name "train grid", found in LTS.dxr.

Lmm.dxr, which contains assets for the game's main menu screen, contains this unused audio track with the internal name "train original", which is an instrumental remix of the 1946 song "Choo Choo Ch'Boogie". Given its length, it was presumably intended to be used as background music. While most of the game's tracks were adapted from the home video, this one isn't, which might explain why it goes unused.

Lmm.dxr contains several voice clips for Frankie which are related to the different areas that the player can visit. Considering that they are noticeably lower in quality than the other in-game voice clips, it's possible these were only intended as placeholders. In the final release, all but one of these lines are spoken by Eleanor instead, with only a few minor revisions (such as changing the word 'toboggan' to 'sled').

Lsa.dxr contains assets for the Bandstand, where the player can view sing-along sequences adapted from the video. A voice clip of Hopsalot saying "responsibility" can be found among other voice clips of him saying the names of the songs listed at the Bandstand. Responsibility is the name of a song from the video, but it wasn't adapted into a sing-along sequence for the game. The presence of this voice clip may imply that this song was intended to be included in the game at some point.