JumpStart Advanced 2nd Grade is a game in the JumpStart series released in 2002, in which CJ and Edison become secret agents and take on spy missions to thwart the villainous Dr. O. This premise obviously necessitates that every single character must wear sunglasses, because...spies.

There is an alternative version of the background for the second mission. The final version is more zoomed in on the house and cropped off part of the bottom, and several elements were removed such as the floating chair, the cattails in the foreground, and the water gushing out of the house.

Another alternative background exists for the third mission as well. The final version replaces the cubes of gelatin with ice cubes, which are also sprites rather than part of the background. There are various other smaller differences, such as the dirt being a different color, more flowers being added to the grassy areas, and more trees in the distance.

An unused variation of the background for Moscow, Russia. The final version added some paved roads instead of having the whole ground be covered in snow, and added a checkerboard. The original snowman was replaced with a completely redesigned snowman which is a sprite rather than part of the background. The unused image also includes some mouth movement sprites for Lucyanova at the bottom. 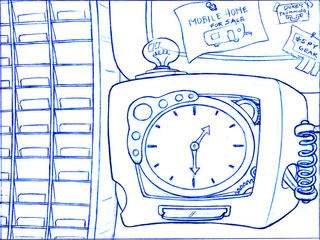 A sketch for an office-like setting that resembles part of one of the game's backgrounds. 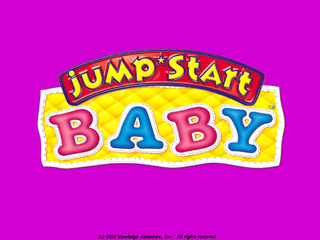 The logo for the 2000 release of JumpStart Baby. 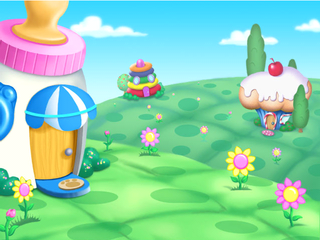 One of the backgrounds from the 2000 release of JumpStart Baby. 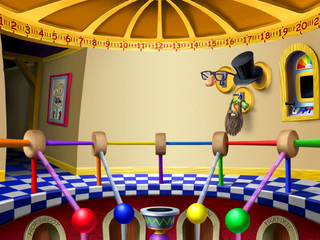 The background for JumpStart Headquarters includes a hallway with a portrait of Hopsalot to the left, which is behind the door that leads to the practice mode for Hopsalot's Invention Lab. The door never opens since the player is automatically taken to the practice mode after clicking on it, so this area behind it can't be seen in-game.

In the Movies folder, there is a .smk file for the intro sequence for JumpStart Baby (2000).

JSA2Gcd.res contains a parody of the Day-O song with lyrics about the Taliban and the U.S. military. Obviously this wasn't intended to be included in the game, so what it's doing here at all is a mystery.